By Conor McPherson; Directed by Ciarán O'Reilly
Produced by The Irish Repertory Theatre 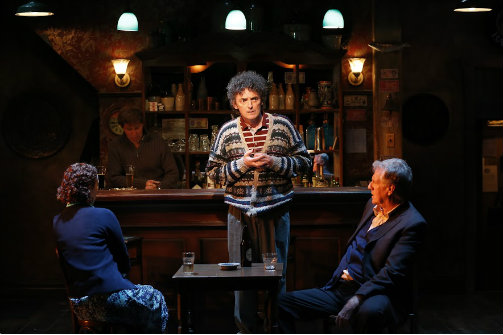 BOTTOM LINE: After a successful 2013 run, Conor McPherson’s brilliant play is back at the Irish Rep and it will chill and warm your heart in equal portions.

Just around “the knock,” in a small, dull, and very old town in the Irish countryside, there’s a pub where the local men come together nightly to drink “small ones” and pints. Conor McPherson’s brilliant script for The Weir is peppered with local vernacular like “the knock” (presumably a rocky outcropping) and “small one” (a way of calling a pour of whiskey, but also of making the excessive drinking seem a bit more modest) and this is one of a seemingly endless list of details embedded in The Weir that bring this story to warm, fresh, pulsating life.

The charmingly modest pub that consists of this play’s single set (set design by Charlie Corcoran, props by Deirdre Brennan) feels worn-in and well-kept by its stoic proprietor Brendan (Tim Ruddy), who himself is like a living component of the set. Brendan is the taciturn barkeep who rarely speaks, but when he does he exhibits just how firm of a grasp he has on the lives and interrelations of his daily customers.

As a whole, the cast has a chemistry that beautifully mimics the relations between men who drink together on a nightly basis and oscillate between warm companionship and bitter bickering. Each of these characters is lonely in his own way and the visits to the pub are a way of escaping that isolation, at least for a while. Jack (Paul O’Brien) is troubled by the lack of a woman in his life as he inevitably gets on in age; Jim (John Keating), with his mop of curly hair, is more likely isolated by his eccentric mind, and often positions himself off to the side, quietly listening—and, to be sure, thinking a lot too; Finbar (Sean Gormley) is boisterous and moneyed and the only one who is married, which itself isolates him from his envious neighbors. This being the case, it is quite upsetting when Finbar (or all people) brings around a new woman named Valerie (Amanda Quaid). Valerie, we find out, has just bought an old house in the country near town and no one can quite imagine what would bring her from Dublin to a place where nothing much seems to happen or change.

The presence of a feminine newcomer makes this evening unlike any other at the pub. Valerie is a prospect, but she’s also a set of ears that hasn’t heard the same old stories over and over again. When Jack takes to telling Valerie a local tale about the house she has just moved into—the kind of local yarn with embellished details and supernatural elements that, in order to preserve the wondrous narrative tension, are best left unmentioned here—it is only afterwards that he realizes such a haunting story could be upsetting for a lone woman to hear about her new house. But once the stories have started, it’s hard to stop, and, as the evening progresses and the Jameson’s and Harp continues to flow, the characters share increasingly intimate and unsettling tales about themselves and their little community and, as an audience member, you feel like you are spying on an intimate evening of what can only be called "ghost stories." When at last the troubled Valerie shares her own story of what has brought her to this place, it is only because she feels the relief of being in company with people who won’t think she’s, as she puts it, “bananas.”

The brilliance of this play is rooted in the language of McPherson’s script; language that is unmistakably Irish and, in that unmistakably Irish way, strikes a fantastic balance between poeticism and real talk. It is always remarkable to me when I find a play so gripping, only later to realize it was simply brilliant dialogue. This wouldn't quite be the case, of course, if it wasn't brought to life by an impeccable cast. There is no star of this show. Even better, each player contributes to build a message that reaches far deeper into us than star power can: isolated as our souls may be, we are all a part of the human fabric and nothing else can truly give us comfort. Although much of this play’s appeal is the chilling effect of ghost stories, the lasting impact is one of radiant warmth.