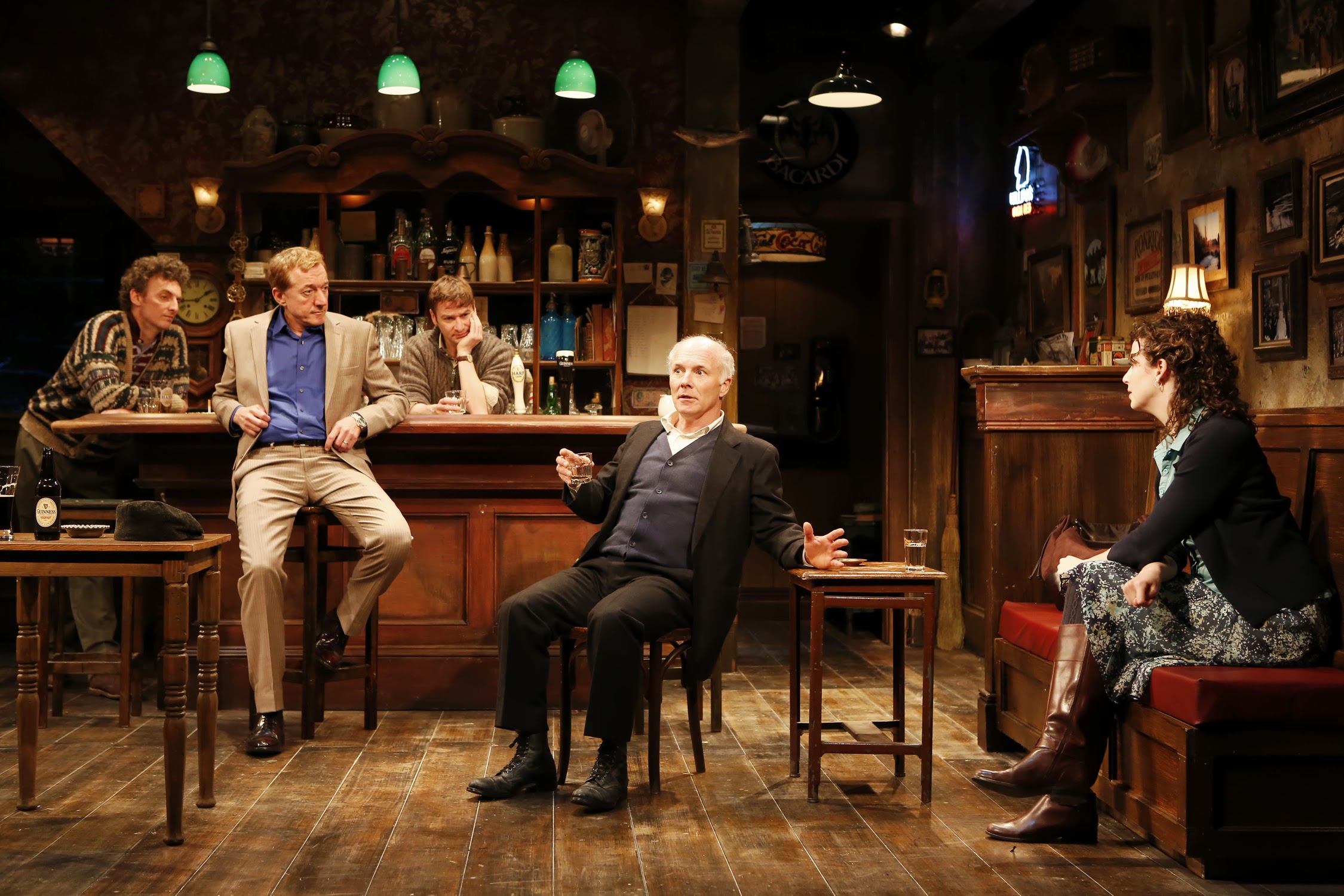 You can tell a lot about an Irishman by what pint of beer he drinks. A glass of pitch black Guinness from the draught is the only acceptable option in the world of Conor McPherson’s country pub in his 1997 play The Weir. When the Guinness draught is inoperable though, as it is at the top of this play, you know you’re in for an evening of unexpected events. The next best beverage would be Guinness in the bottle, followed by Harp in dead last. All of these are complimented by a “small one” on the side – a shot of Irish whiskey. A glass of white wine is a pure anomaly that can throw the entire world off track.  Or, open a portal to an eternal evening of folklore, ghost stories and tales of grief and loneliness. What’s truly being served up in this Irish Repertory Theater production of McPherson’s play though is a master class in storytelling under the crafty direction of Ciarán O’Reilly set in a richly detailed pub designed here by Charlie Corcoran complete with working taps.

In its first major New York production since it played on Broadway in 1999, The Weir is a beloved play that lives perhaps more suitably in the intimate confines of the Irish Rep. space. McPherson’s script is a prime example of the marriage of dramatic structure and storytelling. Throughout the course of 90 minutes there are five yarns to be spun in monologues by four characters. All the while there are also character relationships, actions and a narrative to be developed. McPherson melds the two together so exquisitely that you are fully entranced. The scene set is the American fantasy of what a trip to Ireland might entail – an authentic night drinking with locals in rural Ireland while conversation meanders to tales of fairies and ghosts amidst the backdrop of a howling wind over the hills.

The oratorical leader of the inhabitants of this world is Jack (an engrossing Dan Butler) whose status is made obvious by his allegiance to the national beverage of Guinness. In contrast, Finbar (Sean Gormley) is the flashy real estate man who drinks Harp. The central pub is owned and tended by the younger Brendan (Billy Carter). The other frequent visitor is the oddball contract man Jim (John Keating) -- a man of powerful empathy and subtle intelligence. This fraternity is broken up with the arrival of Valerie (Tessa Klein) who is from Dublin and is renting a house from Finbar. He has brought her to the pub to show off his lovely client like a new wristwatch. However, Valerie brings with her a catalyst to the cozy locale by throwing off the men's routine.

While Finbar’s Harp can be accommodated at least – Valierie’s order of a glass of white wine leaves Brendan apologetically flustered before remembering that there is an old bottle in the house he once got as a gift. When pouring her glass he fills it up as he would a pint. The rest of the evening plays out just as off kilter.

This change of routine is what casts a magical spell over the evening as the men attempt to entertain Valerie. She loves the stories -- the darker the content the better for her taste. Jim’s tale of a ghostly pedophile is especially disturbing, and is told by Keating in an incredibly possessed manner. All of the monologues in the play add to a building tension which is snapped beautifully and heartbreakingly when Valerie reveals her own story of why she’s come from the city to the country. Klein is remarkably generous when it is her moment and provides just enough restraint and emotion to create the most human moment of the play.

Undoubtedly this is one of the best acted shows in New York this season. It’s that simple. There is not a weak moment due to this ensemble's mastery of language, compassion and listening. The traps of the play for lesser actors could be overly playing into the ambiance, yet this stellar cast is always clearly speaking in order to propel the story forward. There is a deliberate structure to the play that is evident on paper, but when acted truthfully it slips away and we are transported inside of this old-world setting. It’s as though the characters have fallen into a brilliant little short story but are entirely unaware. While Finbar can be a tad heinous, he is not unfeeling, and Gormley balances these attributes skillfully. There are no antagonists in this play but there is a dire need all the characters have for each other as the overarching theme of the play deals much with loneliness.

O’Reilly has staged the play in such a way that there is constantly an intentional arrangement on stage emotionally, yet it always feels natural. Drew Levy’s sound design adds an incredible touch to the atmosphere of the play without entering any clichés with the howling of wind. Similarly, Michael Gottlieb’s lighting shifts are subtle enough to enhance moments without detracting from the literalness of the location. Corcoran’s set is as much a character as any human being. Deirdre Brennan’s props and other details to the world add layers of contemporary finishes on top of an architecture that appears perfectly antiquated.

Time goes by in a strange fashion with this production. 90 minutes feels like several hours and it’s still hard to leave the characters and the pub. It’s a testament to just how much you learn about a character through their telling of a story even if the details of their own lives are scant. McPherson is a contemporary genius at this. O’Reilly, the designers, and the cast do McPherson’s play and his commentary on the tradition of storytelling lovely justice in this fantastic rendering.

This is a pinnacle production to celebrate the 25th anniversary for Irish Rep. It's a refreshing theatrical experience for anyone interested in the art of a good story -- and you might as well plan ahead on going out for a pint or two after the show.