$30 tickets available for those under 30 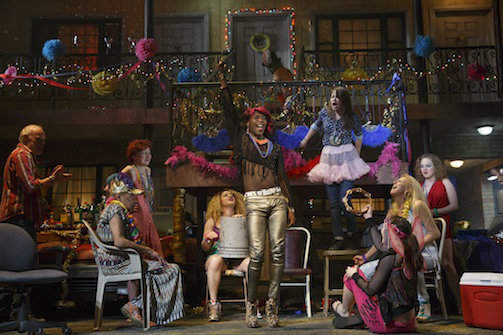 K. Todd Freeman and the company of Airline Highway. Photo by Joan Marcus.

BOTTOM LINE: This moving, dark comedy about a group of misfits living in a New Orleans motel is an exciting new play option on Broadway.

When you walk into the Friedman Theatre, where Lisa D’Amour’s new play Airline Highway opened on Thursday, you can almost hear the hum of the neon lights on the sign for the Hummingbird Motel.

Scott Pask’s gorgeously atmospheric set instantly transports you to the parking lot of the motel, which, with its weekly rates, is more like an apartment complex. We are on Airline Highway, the famed stretch of road in New Orleans.

The play, which originated at Steppenwolf Theatre in Chicago with a slightly different cast, unfolds as D’Amour introduces us to the cast of characters. Krista (played with amazing vulnerability by Caroline Neff) is a dancer at a strip club. Wayne (a genial Scott Jaeck) is the owner. Francis (Ken Marks) comes in on a bike, looking for coffee before he heads to work. He’s also a poet. Upstairs are transvestite Sissy Na Na (the always excellent K. Todd Freeman) and prostitute Tanya (played with stunning compassion by Tony Award winner Julie White). Terry (Tim Edward Rhoze) wants to fix the loose drainpipe, and bargains with Wayne about how much he’ll give him to fix it. This is the crew at the Hummingbird. They’re like a family, except they’re not.

Miss Ruby also lives upstairs, in the room between Tanya and Sissy, and she is not long for this world. So, they are planning her a funeral to celebrate her life before she’s gone. Soon, we meet former Hummingbird resident Bait Boy -- call him Greg now, he insists -- charismatically played by Joe Tippett, who returns to the Hummingbird to say goodbye to Miss Ruby.

Bait Boy has a real job now, and lives in a nice house in Atlanta with his girlfriend and her teenage daughter, Zoe (an appropriately enthusiastic Carolyn Braver.) He brings Zoe along on his return to New Orleans, at the request of her mother to keep an eye on him, and so she can write a sociology paper on the “subculture” of the Hummingbird residents.

It’s an effective, if obvious, device for Zoe to act as the audience surrogate, as she interviews each of the main characters, giving us glimpses into their pasts.

Pask’s set is accented by beautiful lighting by Japhy Weideman and naturalistic costumes by David Zinn. Joe Mantello (The Last Ship) has done excellent work (as always) crafting a true ensemble piece. Many individual performances are stunning but don’t overwhelm the whole. There are often overlapping small scenes happening at once, yet each one is clear on its own and complementary to the rest.

If anything, Airline Highway is light on plot but rich on character. With characters like Krista and Tanya, large amounts of background and character development are given over two hours, but D’Amour has written it so artfully that it just feels like we’re hanging out with them, as they let their stories unfold.

Airline Highway is an ode to these people, whatever you want to call them: misfits, outcasts. It is a portrait of a specific group, and an ode to their quirks, which is why Zoe’s “sociology paper” may feel a little too on the nose, although it’s easily forgiven. They’ve all had hard lives that have led them to the Hummingbird, and there are a lot of laughs in between.

The play isn’t perfect; we lose focus in the second act once we meet Miss Ruby (a stunning Judith Roberts), but ultimately I came away from the play moved, and grateful to Manhattan Theater Club for bringing it to Broadway, because it’s not a play I would expect to see in a Broadway theater with its enormous ensemble cast of 16. (Notably, it’s also the first new play by a woman on Broadway since Nora Ephron’s Lucky Guy in 2013.) It’s maybe not a play to bring your out of town relatives to (it’s pretty dark for a comedy), but definitely a worthwhile experience for a serious theatergoer.