Music and Lyrics by Sting; Book by John Logan and Brian Yorkey
Directed by Joe Mantello 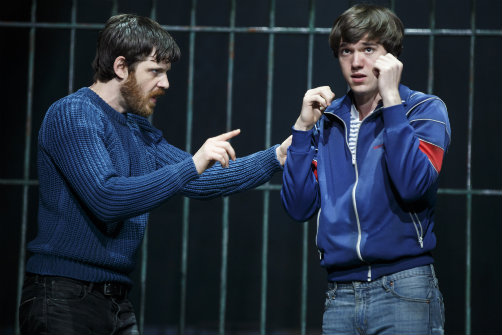 Michael Esper and Collin Kelly-Sordelet in The Last Ship. Photo by Joan Marcus.

BOTTOM LINE: Sting's new musical has a gorgeous score and amazing performances that make this show well worth your time.

One dash Kinky Boots, two pinches Billy Elliot and a handful of Sting and you’ve got a marvelous new musical.

The Last Ship, with music and lyrics by the 16-time Grammy winner opened on October 26th at the Neil Simon Theatre on Broadway. The only original musical coming to Broadway this fall boasts a team of heavy hitters, whose names are emblazoned on the theater next to Sting’s: director Joe Mantello, choreographer Steven Hoggett, and book writers John Logan and Brian Yorkey.

It’s okay if those theater names don’t mean anything to you. They’re there to give Sting some theater cred. This is, after all, his first Broadway musical. Though from the beautiful score he’s written, it seems like he was born to write one. Sting grew up listening to Rodgers and Hammerstein, particularly Carousel, and these influences are evident in the music. He knows how to write a musical theater song, shown in songs like “The Night the Pugilist Learned How to Dance.”

A few of Sting’s songs have been repurposed, but that doesn’t make this a jukebox musical. You may recognize “When We Dance,” “All This Time,” “Island of Souls,” or “Ghost Story” from Sting’s albums, but those songs fit seamlessly in with the new ones.

The story focuses on Gideon Fletcher (the brilliant Michael Esper), a 30-something sailor who returns to his hometown, Wallsend in Northern England, following the death of his father and has to come to terms with the life -- and the people -- he left behind. Notably, he left behind his girlfriend, Meg Dawson (the radiant Rachel Tucker in an outstanding Broadway debut), and he’s still in love with her.

Yorkey was the original book writer on the project and Logan took over when Yorkey left to launch If/Then; unfortunately, the book feels a little patchwork as a result. The characters aren’t fleshed out much, and the details of the shipbuilding plot are unclear. There is a lot of talk about Gideon’s father, but barely any information about him is given, other than he worked in the shipyards.

In the opening scene, we see Young Gideon (Collin Kelly-Sordelet) and Young Meg (Dawn Cantwell) discussing wanting to leave Wallsend. Meg says, “I can’t go.” Gideon: “I can’t stay.” Gideon’s father urges him to join the shipyard, but that’s not a life he wants. Gideon gets on a ship, and promises Meg he’ll return for her. Cut to 15 years later, Gideon returns home. We aren’t given any specifics on where he was or why, other than he was sailing around the world. This is a little frustrating, because the creative team obviously wants the audience to sympathize with Gideon. But the story tends toward broad themes and allegory, which make it hard to relate on the specifics.

Gideon is welcomed home by Father Jim O’Brien, the town priest. (Fred Applegate plays the part with the perfect amount of comic relief and tenderness.) Meg wants nothing to do with Gideon, she’s with Arthur Millburn (Aaron Lazar) now. After all, it’s been 15 years. The shipyard has recently closed down, leaving the workmen of the town unemployed and depressed. Arthur Millburn and Freddy Newlands (Eric Anderson) are real estate developers, offering the men jobs working in scrapyards, which they find unacceptable. So they take matters into their own hands and occupy the shipyard, to build one last ship.

As a love interest, Arthur is the opposite of Esper’s Gideon. Aaron Lazar has a pure musical theater tenor (which soars on his ballad “What Say You Meg”); whereas Esper’s singing voice is more like Sting, with a rock and roll, singer-songwriter edge. This is excellent casting all around, and “When We Dance," the number between Tucker, Lazar and Esper, is one of the most beautifully staged in the show.

Michael Esper, who has been working mostly off Broadway for a decade, has his first leading Broadway role with The Last Ship. For anyone who has seen him shine in supporting roles, we know it’s been a long time coming. They’d be hard pressed to find anyone better to represent Sting’s music with this story. He carries the show with strength and grace, and despite the underwritten role he’s given, he makes Gideon extremely likeable.

Collin Kelly-Sordelet plays the dual role of Young Gideon/Tom Dawson. The Last Ship is his professional debut and he is an excellent find. He has a ton of stage presence and is thrilling to watch.

The scenic design by David Zinn and lighting by Christopher Akerlind are beautiful, atmospheric, and mood setting. Zinn’s dated looking costumes are less successful. Brian Ronan’s sound design is excellent, as always. Hoggett and Mantello have both done excellent work in crafting the pacing and movement of the story.

Though the book could have used another draft, particularly to tell us more about the characters of Gideon and Meg, The Last Ship is a great achievement. It’s a risky, original musical for grown-ups.

(The Last Ship plays an open ended run at the Neil Simon Theatre, 250 West 52nd Street. Performances are Tuesdays at 7PM; Wednesdays at 2PM and 8PM; Thursdays at 7PM; Fridays at 8PM; Saturdays at 2PM and 8PM; and Sundayst at 3PM. Tickets are $55- $147 and are available at ticketmaster.com. There is a ticket lottery for front row seats for $30, details at TheLastShip.com. Full schedule and show information are available at TheLastShip.com.)