Off Off Broadway, New Musical
Runs Through 8.2414
The Loretto at the Sheen Center, 18 Bleecker Street 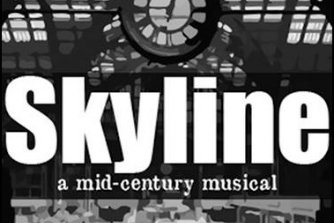 Urban planning, it turns out, is a fascinating topic for a musical. Earlier this year, If/Then opened on Broadway, exploring the life of a fictional modern day city planner. Currently playing downtown at the NYC Fringe Festival is Skyline, a mid-century musical about the fight to save the historic Penn Station building. Unfortunately, we all know that the building will be torn down in the end, but that doesn’t make the concept any less compelling.

With book and lyrics by Maureen FitzGerald, and music by FitzGerald and Taylor Williams, Skyline tells the story of Paul (Joseph Spieldenner), an activist fighting to save the historic Penn Station building, and Allison (the appealing Katie Lee Hill) , an eager young copy editor who is swayed by Paul to fight for the cause. She works for a magazine called Skyline, and wouldn't it be great for the cause and for her career if she writes a story on the Penn Station controversy?  It turns out that her fiancé Henry (Peter Gosik), however, is the architect for the new Madison Square Garden. Is it a conflict of interest? What’s more important: her future husband or her career?

Skyline is a little too long at two hours, and could be trimmed of excess songs and plot; the romantic relationships seem to take up too much time when what is really interesting is the city and the building. However, there is a lot of great material here, including some very tuneful and moving songs, “This is New York” and “Whatever Happens Now.” The writers could definitely trim the character list as well; we really only need four or five characters to tell the story.

The actors are mostly well cast and have strong musical theater voices. Male vocal standouts included the aforementioned Spieldenner and Gosik, and Adam Machart. Katie Bruestle as Rory has a great voice, and made me laugh out loud on more than one occasion.

If a musical about Penn Station, urban planning and the creation of the Landmarks Preservation Committee appeals to you, Skyline is worth checking out.