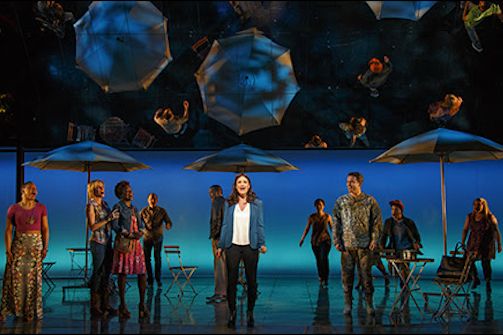 BOTTOM LINE: A love letter to New York and the modern musical, If/Then has all the trappings of a success.

The so called Original Musical is a very rare thing to see on a Broadway stage in this day and age where we are surrounded by adaptations and revivals (which isn’t necessarily a bad thing – I frequently love those shows). This season particularly has a variety of recognizable juggernauts – The Bridges of Madison County, Aladdin, and Rocky just to name a few. Amidst this herd comes If/Then. There’s a powerhouse of bankable talent with the show – the creators of the Pulitzer-Prize winning Next to Normal, as well as Idina Menzel of Rent, Wicked and Frozen fame. But these aren’t necessarily draws for the tourists who are still lining up for The Phantom of the Opera 20 years later. And yet, I predict this show will be a hit.

With a premise reminiscent of the Gwenyth Paltrow movie Sliding Doors, If/Then offers amazing performances and brilliant music, and captures the essence of life in New York City. Elizabeth (Menzel) returns to the city in her late thirties. One fateful afternoon in a park she decides to go listen to a guitar player with her friend Kate (LaChanze) who calls her Liz...or to a protest in Brooklyn with her college ex-boyfriend Lucas (Anthony Rapp) who thinks Beth is a much better name. We follow the next few years in the lives of Liz and Beth, one of whom finds love despite the lack of a career and the other who enjoys great personal success but a dearth of relationships. While both tales are chock-full of cliché the entire production comes together for a deeply rewarding, thoughtful and emotional evening.

Tom Kitt’s music is just as brilliant as it was in Next to Normal, as is Brian Yorkey’s book and lyrics. I’m sure several of Menzel’s numbers will be sung in cabaret bars and auditions for years to come. Menzel gives without question her best performance since Wicked, and a much more mature one than I’ve seen from her in the past, with her acting chops finally catching up to her vocals. LaChanze is as much a magnetic star as ever and I’m tempted to say she may have a featured actress Tony in her pocket for this performance. And it’s a pleasure seeing performers like Rapp, Jerry Dixon, Jenn Colella, Jason Tam and James Snyder sharing a stage.

Mark Wendland’s set design and Kenneth Posner’s lighting design also deserve special attention in Michael Greif’s slickly directed production. With use of minimalist sets, a small turntable and a mirror, the production creates city parks, subway cars, bridges, rooftop parties, kindergarten classes and a variety of other locations that are immediately recognizable and simultaneously evocative of the character’s journeys. My favorite moment of the entire show may be when Liz runs out of the room after kissing Josh (Snyder) and the doorway turns to reveal her closet of a bathroom...vintage New York City living.

I don’t have any doubt that both avid theatregoers and tourist audiences alike will find something to love about this show. Whether through moments that they personally relate to or those that hold an almost Sex and the City-like dream of what life in the Big Apple can be, there is truly something for everyone to be found here. If/Then could definitely still benefit from some tightening up, particularly in the second act, but the good so far outweighs the bad that it almost doesn’t matter. What can I say? ‘If’ you like musicals, ‘Then’ you’ll love If/Then.