To Dance - The Musical

Book & Lyrics by Kyra Robinov, Music by Tibor Zonai;
Directed and Choreographed by Donald Garverick
Produced by Dancing in the Dark Productions
Part of the 2015 New York International Fringe Festival 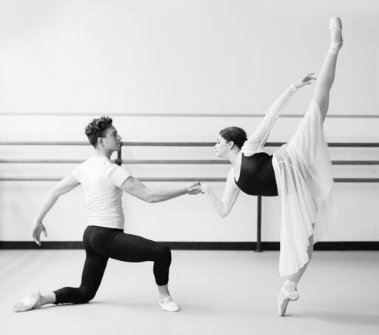 Jesse Carrey and Kathryn Morgan in To Dance. Photo by Erin Kestenbaum.

BOTTOM LINE: To Dance is a testimony to strong will, determination, and effort overcoming oppression and tyranny, based on the beautiful story of the early life of dancer Valery Panov.

It is the middle of the twentieth century, in Leningrad, the Soviet Union. We greet young Valery (Andrew DiTusa) as he travels from his hometown of Vitebsk, enters the best ballet training school in Russia, and meets his roommate, Yuri (John Ray). The two become good friends as they grow up.

Fast forward, and we see the Valery and Yuri as adults (performed by Jesse Carrey and Joshua Rees Hopkins, respectively) and taking lead roles at the Kirov Ballet. We learn that Valery is an audience favorite. He loves to demonstrate his virtuosic talent on stage. And everyone loves him, except Rachinsky (Rick Roemer), the new director of the Kirov, who despises him. This is further revealed in the song “Piece of Glass,” where Rachinsky sings that Valery is a piece of glass within his beautiful gem (the ballet troupe).

This is where the drama begins to unfold. The KGB strongly disapproves of Valery’s attitudes—standing out from his peers, glorifying individualism. The ballet troupe repeatedly sings “Perfect Machine,” where every member of the communist party should function collectively. This is also the time Elvis Presley and Marilyn Monroe become international stars, but members of the ballet troupe are forbidden to listen to American songs or idolize American celebrities. In a tour to the United States, Valery violates their rules by taking photographs and talking to a U.S. director. Valery’s best friend Yuri is questioned and persuaded to spy and put pressure on Valery’s behavior. But we don’t see the inner struggle Yuri goes through, and how the KGB enforces pressure on its people to a point where they are forced to submit.

To Dance, with book and lyrics by Kyra Robinov and music by Tibor Zonai, brings Valery Panov’s triumphant story of struggle to light, and reminds us of the dangers of history repeating itself. It was a gruesome journey for Panov. The musical reveals that his career is destroyed, he is forbidden to return to the Kirov Ballet, and later he is put into prison. A Russian Jew, Valery applies for an exit visa to Israel but is denied. Finally, in 1974, he and his second wife, Galina Panov (performed by Kathryn Morgan) are both approved to exit the Soviet Union for Israel.

Panov is one of the few lucky ones to find a passageway out of an oppressive regime. With the support of the public, as shown in demonstration protests during the play, the authorities are afraid of doing too much harm to him. The ending is an emotional moment where the iron gates (symbolized by bars) are finally lifted, like the iron curtain; we start to see a glimpse of hope.

The spirited music is especially refreshing with its Russian folk tunes and dances, making a vibrant scene on stage and transporting us to far away places. The three musicians (Evan Rees on piano, Thomas Carroll on reeds, and Timothy Leonard on cello) perform well and I sometimes wished I could see them on, or closer to, the stage. I also feel the balletic movements and scenes, and the folk song scenes, should have greater importance in this period musical. Further crossing the genres would make a more memorable piece.

Overall the cast is solid. Jesse Carrey is lively and gives a fine performance as Valery. Kathryn Morgan (former New York City Ballet soloist) performs memorable dance scenes as Galina. As Young Valery, Andrew DiTusa has a charming stage presence and sings with a clear, bright voice. The duets between Valery and Liya (Valery’s first wife, played by Lyndell Higgins), show great chemistry. Joshua Rees Hopkins as Yuri is solid and in character, as is John Ray as Young Yuri.  And last but not least, Hannah Zimmerman as Mme. Sergeyeva and Mama is believable playing traditional Russian characters. The entire twelve person ensemble performs organically under the direction of Donald Garverick.