Off Off Broadway, Play
Runs through 8.26.15
VENUE #5: The Celebration of Whimsy, 21 Clinton Street 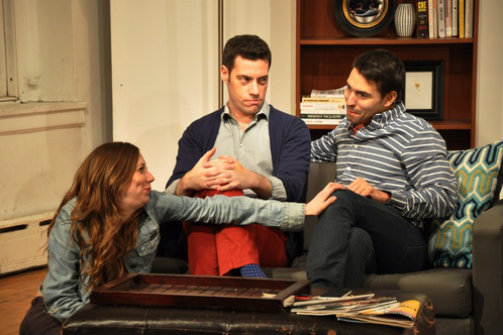 BOTTOM LINE: This production's spot-on humor focusing on modern day dating and its reliance on technology makes it worth seeing.

It’s undeniable that technology has come to play a central role in modern day courtship. Many relationships now start online, and even if they begin in real life, much of the getting know each other and vetting will happen through text messages, Googling, and Facebook trolling. This fact is explored in ReLateAble when one day our three main characters awake to find that the end of the world has arrived: the internet is down everywhere and no one’s phone is working. Ann (Emmanuelle Bernard) and Fran (Jackie Viscusi) take this in stride as they peer out their apartment window waiting for the looting to begin. Meanwhile, Ann’s roommate Jon (Bautista Durate, who also directed the production) begins to freak out as he has invited a potential suitor, Paul (Brent Dixon), over for drinks so he can be vetted by Fran and Ann to see if he is deemed dateable. Rather than contemplating the end of the world, Jon is more concerned with how he is going to do a background check on Paul without the internet. If he can’t look him up online how can he be sure he isn’t a weirdo?

This leads to Paul breaking down his bizarre checklist of required characteristics for a partner including hair color, pet preferences, and feelings towards sports. Ann, meanwhile, reveals that her ex-boyfriend, whom she is still struggling to get over six months after their breakup, sent her an insultingly stupid text message out of the blue, just before the service went down, and that she made the mistake of responding to him. This seems to have reopened old wounds. Paul arrives soon after and Ann and Fran jokingly quiz him on his preferences regarding sports and cuddling. Without technology to do spot checks, Jon is left to his own devices and follows his gut for the first time. He tells Ann that he thinks he likes him, but then asks, “How do I know that it’s real?”

ReLateAble is an engaging production from start to finish due in part to playwright Derran Moss-Dalmau’s writing, and the actors' ability convey both the humor and deep emotion running through the script. The script’s jokes about about dating and our unhealthy dependency on technology ring true as an accurate reflection of our current lives. As Fran, Jackie Viscusi adds zaniness and constant comedic relief to the production. Emmanuelle Bernard meanwhile adds emotional weight to her depiction of Ann, showing a woman who uses cynicism and humor to numb the pain of her recent heartbreak. Ann and Jon’s discussions on the logistics and emotions involved in the cycle of heartbreak and love show fresh insight on how one goes about finding a partner with whom they are compatible in a world where technology has pushed us further apart,

Overall, ReLateAble is a refreshing comedy with drama and darker ruminations on love and sexuality darting beneath its deceitfully lighthearted surface.