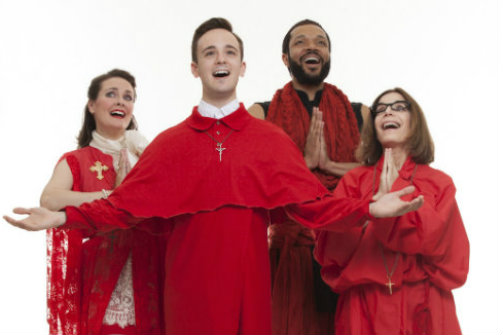 BOTTOM LINE: A wacky musical Papal showdown with a band of very unlikely candidates to determine who will be the next Pope.

The Pope is dead. The Cardinals gather in the Sistine Chapel to choose a new Pope. The bad news is that there has been a random accident on a cruise ship and only a motely crew of eight cardinals from all over the globe will pick the next Pope. This unlikely lot is led by an angry European battle axe and his meek British sidekick who are joined by a foul-mouthed Jersey girl, an Asian Zen master, a sweetly confused Jew-ish Cardinal, a former Southern Belle who has escaped from a mental hospital, a mute Russian ballet dancer, and a Cardinal with a heart of gold. The last appears to be the clear choice for the job, but there's just one little secret standing in his way. The group must battle in a series of "Papal Challenges" until someone receives 2/3 of the votes and can then be crowned the new Pope. No one has ever seen what happens—until now. The backbiting. The sacrilege. The song and dance. And musical chairs. Masks, courtesy, and piety are stripped away as the Cardinals discover who they really are—and what it really takes to be Pope.

Popesical is a pretty enjoyable evening at the theatre. Adam Overett, who penned the book, music, and lyrics, has created an irreverent dose of religious satire packed with a dash of unexpected heart here and there along the journey. The cast does an excellent job with Overett's contemporary score. Stephen Christopher Anthony as Cardinal McCafferty brings a much needed level of humility and vocal ease to the wacky shenanigans. Danette Holden as Cardinal St. Louis is also hysterical as the slightly crazy, sex starved, substance addicted, Southern debutante gone bad who knows she is the best candidate for the job and proves it in her rousing gospel number that nearly brings down the house. The rest of the cast is very skilled and presents a finished product that is much more polished than the typical festival show. A special shout-out also must go to Janie Bullard who created an awesome sound design. Popesical is probably one of the best mixed shows I have heard in a theatre that small—hats off to you.

Popesical still needs a bit of work, relying as it does on a few tired jokes that don't quite seem to resonate with the audience. One particular gag, riffing off of a famous Australian camp joke, recurs again and again and just doesn't seem to land the way the smartly written material throughout the rest of the show plays. That said, Popesical seems ready for bigger and better things and is certainly well on its way. Check out this incarnation now so that you can say you saw it when it was just playing at that cute theatre downtown in the Village.