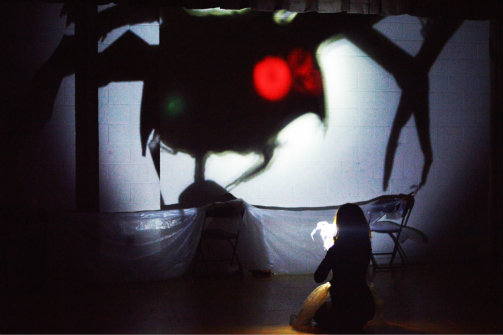 BOTTOM LINE: A theatrical shadow-puppet experience that is fun for the family.

As theatregoers, we are used to sitting in the dark, but we have the expectation that the lights on stage will eventually rise. In the case of Dungeon, a collaboration between Artistic Abandon NYC and Hit the Lights, Dad Theatre Company, this never really happens, and the result is a family-friendly riff on shadow and darkness.

To boil it down, Dungeon is essentially a shadow puppet show. When a boy’s sister falls down a mysterious hole in the ground, he jumps in after her and finds himself in a subterranean world of spiders, jellyfish-like creatures, mysterious trees, and of course, perpetual darkness. The production alternates between using two-dimensional actors and human ones to convey the story of a boy diving into the unknown to retrieve something precious. While Dungeon may not be the most polished use of shadow puppetry, the team still earns many points for creativity.

The clearly told journey uses virtually no dialogue (just occasional screams and ever-present panting), but instead relies entirely on the small ensemble to create the vivid atmosphere in the blackness. Suddenly actors morph into trees and cave walls, and objects like plastic bags and day-glow bendy straws take on a life of their own to populate the mysterious underground world through which the boy must traverse to regain his sister. Haunting electric guitars add an ominous tone to the piece, and when a certain eight-legged shadow scuttles across the walls, tiny gasps can be heard throughout the audience.

Having grown up in the age of Goosebumps and Are You Afraid of the Dark?, Dungeon feels like an extension of the youth-horror genre in a time where theatre seems increasingly interested in imaginative and unconventional means of storytelling. This playful and frightful show can be a lovely diversion for those with kids who are ready to abandon their Nite Lite.