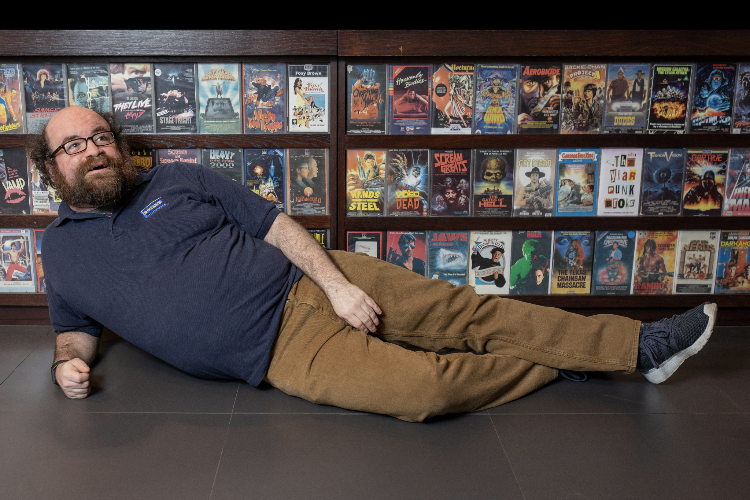 BOTTOM LINE: Mark Levy is your guide to that vanished part of American culture: the Blockbuster video store. You’ll be surprised how much you miss it.

Picture if you will Florida, 1985. Parents are taking their young child to see his first movie, Pee Wee’s Big Adventure. That young man, Mark Levy, grew up vowing one day to work in a Blockbuster Video store. See him talk about the ups and downs of achieving this dream. Does a poppyseed bagel show up on a drug test? What kind of people does one meet in a Blockbuster? Yes, there are thirty-five year-old co-workers who still live with their moms. And yes, there are salt-of-the-earth Floridians who recognize Mark even in disguise at a Halloween haunted house. Once upon a time, Blockbuster brought so many people together.

Accompanied by Adam Sherwin’s projections, Mark engages the audience in polarizing discussions about famously good (or bad) films of the late twentieth century. Paul Flaherty’s Clifford (1994) might be considered a cult film, or is it a film for a “bad cult”? Ace Ventura: Pet Detective (1994) probably seemed funny at the time, while these days many of us would reject the cheap, transphobic humor. John Leguizamo’s The Pest (1997) could use a less racist stage revival, which Mark plans to make happen. We are also treated to Blockbuster commercials starring Carl and Ray, the rabbit and guinea pig who can only look out their window at people visiting the local Blockbuster.

Blockbuster Guy is a personal one-man show that transforms a black-box basement theater into a cinema. While opening up on so many levels, Mark gives you the chance to do the same. What’s it like to finally be allowed to watch a horror film? What was your first? Do you remember a world full of so many amazing possibilities? Which movies did you decide not to rent, and are they the true classics? (Miami Connection (1987) is one recommended contender.)

The team of Levy and director Kristen Keim has presented interesting work in previous years’ Frigid Festivals, including Lenny Bruce is Not Afraid, an apocalyptic story. Last year’s CC: You in Hell! (written by Levy, directed by Janet Bentley) displayed knowledge of the inner workings of the horror genre. And where does Mark work nowadays when he isn’t onstage? Perhaps you’ve seen him at Alamo Drafthouse, today’s version of a cool place to see old and new movies.