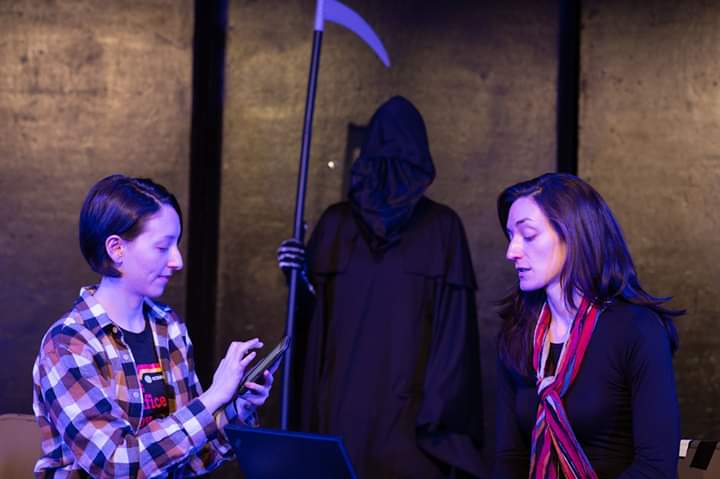 Sara Detrik and Caroline Burke in CC: You In Hell! Photo by Arin Sang-urai.

BOTTOM LINE: The apotheosis of '90s horror films has arrived, with a comic twist.

Do you remember the 1990s? If so, are your cherished memories of films that made you scared of new technology? After all, where can you run to escape a deadly email chain letter? (For the benefit of younger viewers, a character in CC: You in Hell! does explain what a chain letter is.) The story starts with Professor Glen Peters (Mark Levy) talking to a college class about '90s pop culture. Glenn uses a randomizer to choose seven other recipients of his chain letter. Those who forward the letter again will receive good fortune. Those who delete the message may not live to regret it.

And there we are, in a situation familiar from '90s horror films. People are scared and perish suddenly, before we can learn much about them. But in this play we learn how they are connected and we can have a richer, scarier experience. The spectre of death hangs over these characters. The hooded, masked grim reaper lingers in the background in most scenes. Glen successfully sends off the chain letter and dies of a heart attack (but at least he meets his end through natural causes).

We are then treated to scenes involving his high school friends, and their decisions, often on a whim, about whether to delete the email or pass it on. Lesbian couple Jordan (Caroline Burke) and Charlie (Sara Detrik) are coping with busy work lives and barely get to see each other. Irene (Taylor Graves), Glenn's ex-wife, now lives with the high-testosterone Hank (John Racioppo). And teenage Stu (Sam Mercer) plays an online game while his mother Claudia (Taylor Graves) prepares to take them to her high school friend’s housewarming party.

And now for the twist. Instead of letting the survivors be those who are risk-averse virgins, we see that those who are trying to change their lives and are more present in real life may not die. Ryan (Mark Levy) has recently returned to his parents' place in New York after his extraction from a cult. This earnest man has missed many years of media trends; for better or worse, he doesn't know what Netflix is. When Ryan says he is going to the housewarming party, his father (James B. Kennedy) comes along. Hostess Jess (Kayla Mason) helps everyone piece together their painful experiences—most of the guests knew Glen. The group finds a way to listen to each other, minimize the technological barriers in their lives, and perhaps start over.

Mark Levy, who works at Alamo Cinemas and is no stranger to film, has made a humorous update to the you're-going-to-die horror genre epitomized by Scream and many other such movies. With the help of the hard-working cast, who double many roles, we see how much we are connected, even to those in our distant past. Director Janet Bentley creates much welcome pathos for everyone, even the grim reaper. Bentley's sounds design brings an edgy and fun '90s attitude. Projections by the Roly Polys (Andy Evan Cohen and Janet Bentley) track the inexorable progress of the chain letter. Death is so impersonal, like a video game. But we can make the world a more hospitable place for our friends and families.