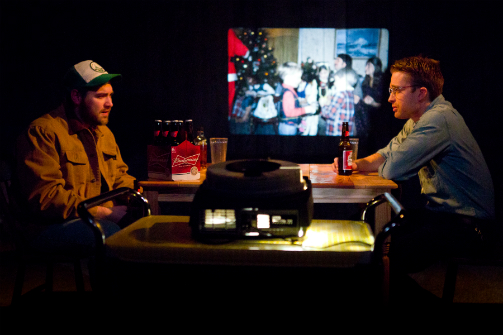 Act One opens with the buzz of an old slide projector. Tom and Grant, brothers (played by Daniel Abeles and Nate Miller, both excellent) flick through the slides, looking for the photo of their long lost brother. Tom is a PhD candidate, Grant works with natural gas, and they haven’t seen their brother since they were kids. Through their conversation, we learn that the Tuttle family has a secret, a secret that not even the brothers know.

In Brian Watkins’ fantastic new play Wyoming at Theater for the New City, we have a new, gripping, family drama. The play not only creates a bit of a mystery story, but we individually meet the members of the Tuttle family, before they all meet up for Thanksgiving dinner, leading up to the climax of the plot.

The exposition in the first scene tells us that their father Tom, was killed in a domestic accident by their brother Adam (Roger Lirtsman), who they haven’t seen in the twenty years since. The boys were too young to fully comprehend the details of the day that they lost their dad, but they know their mom is hiding something, part of the story that only she and Adam know.

Beautifully directed by Dayna Taymor, the production smoothly moves through flashbacks and setting changes, while creating a suspenseful atmosphere. After meeting the brothers, we move back in time to witness Maggie and Hank (Laura Ramadei and Carter Hudson) meeting at a bar. Watkins’ subtle writing doesn’t tell us this straight, but we fill in the details as Maggie tells Hank she would love to name her daughter April.

The scene fades back to present day, 1995, with daughter April (Sarah Sokolovic) on a date, her daughter Sarah (Layla Khoshnoudi) beside her, listening to her Walkman. As April, Sokolovic has a commanding, extremely believable presence as the eldest daughter. She tells the story of the day they lost their father to her unseen date as a monologue, capturing the attention and empathy of the audience. She explains to her date that she has been writing to Adam, and has invited him to Thanksgiving dinner. (Of course, the rest of the family doesn’t know this, yet.)

As the Tuttles gather for a family dinner, the play veers even more into August: Osage County territory (I mean this as a compliment.) Maggie, Tom, Grant, Sarah (with headphones to block out the adult conversation), April and Adam (who doesn’t speak, by the way) gather around April’s table, which means things can only end well, as they are forced to address the elephant in the room, ad they haven’t seen Adam in 20 years.

Wyoming runs a brisk 95 minutes, and the team manages to tell a complete and satisfying story, all while keeping the suspense and tension high. You truly don’t know where the story is going. Watkins has created authentic and familiar characters and situations, who speak and act the way that real people do. All the actors give great performances, and work well together as an ensemble, and are believable as a family.

The way that Watkins crafts the story, having the actors tell the exposition to each other, allowing the audience to feel like a fly on the wall as details of the past are revealed, is really special, and allows Wyoming to become more than just another family drama.

The production is designed by Edward T. Morris (sets and projections), Beth Goldenberg (costumes), Masha Tsimring (lights), with music by Neal Morgan and Robin Pecknold (of the band Fleet Foxes). All the design work enhances the play’s production and sets us in the right time and place, with the music helping to create the requisite tension.

Wyoming is set for a three week run through January 31st at Theater for the New City, but I have a feeling we’ll be seeing this play elsewhere in the city in the future.