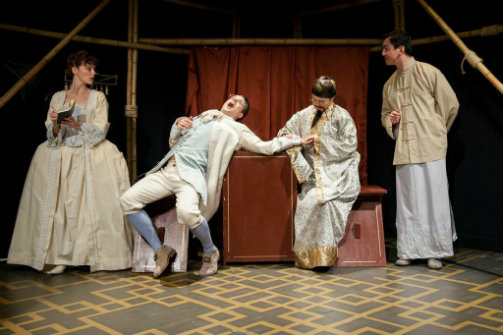 BOTTOM LINE: An enjoyable, sort-of-historical comedy about cultural differences – in medicine, in social mores, and in love.

When making theatre based on historical figures, artists typically base the work around a human subject – they often research the characters and events in question and attempt to figure out who such-and-such really was. In The Subtle Body, Megan Campisi does something else: she eschews the biographical facts about Sir John Floyer (1649-1734) and instead takes as her inspiration his medical writings. The result is a comedy that might take place in 1707, but most definitely speaks to the increasingly global present.

As far as I can tell John Floyer spent all of his adult life in Lichfield, England, writing about cold baths, asthma, and most famously, standardizing the method for taking the human pulse. Campisi’s Floyer is a different person altogether – he brings his wife to China in order to research Chinology…Chinestry…well, whatever he decides to call traditional Chinese medicine. The trick is finding a Chinese doctor who will speak to him – and like many who travel abroad, Floyer is shocked to find that “getting in with the locals” is often a lot harder than one might expect. But through his translator, Floyer is introduced to Doctor Zhang, an expert in (among other things) the traditional Chinese practice of pulse diagnosis.

Floyer proposes an intellectual exchange of sorts: Zhang will teach him about pulse diagnosis, massage, and acupuncture, and Floyer will regale Zhang with the discoveries of those giants of Western medicine – Aristotle, Galen, Paracelsus, William Harvey, and the like. But one of Campisi’s main points is that what we in the West find so impressive is often…less so in other places. And Zhang’s increasing disappointment in Floyer’s “lessons” is matched by Floyer’s increasingly failing health – brought on in part by his adamant refusal to eat nothing but noodles.

Indeed, Floyer here, as played by Michael Zlabinger, is an almost cartoonish Westerner, the suspicious-of-anything-foreign white guy who never realizes just how little he knows, and how much other cultures might have to offer. Zhang (Ya Han Chang in drag) is similarly more of a plot device than a fully fleshed out character. But this is by design – Campisi’s project here is to focus not on the doctors – those “important” historical men – but on the women in their lives.

It gradually becomes clear that The Subtle Body is not about Floyer, but about his wife Charlotte (Stephanie Wright Thompson), who accompanies Floyer to the lessons under the pretext that a female subject might be needed for demonstrations. But Charlotte (the name is Campisi’s invention) has romantic and sexual needs that remain largely ignored by her husband, and soon becomes aware of an insistent pulse of a different kind. While Translator Wang Ming (Johnny Wu) facilitates the conversations between Floyer and Zhang (providing many humorous instances of the confusion inherent in translation), he also develops a growing bond with Charlotte. One problem – Wang Ming is also married. While Wu’s Translator Wang is perhaps the most fleshed out of the male characters, it’s really the female characters – Charlotte and Wang’s wife Furen (also played by Ya Han Chang) who are the most complex. While I won’t give away the way in which the love triangle is resolved, Chang and Thompson’s performances as two women living in two intensely patriarchal societies were, for me at least, the heart of this piece.

If The Subtle Body touches on serious issues, it is definitely a comedy. So while at times some of the differences in culture and gender are perhaps overly simplistic (at least to a modern eye), I suspect this derives in part from director Michael Leibenluft’s desire to keep the tone light throughout. And Leibenluft’s choice to supertitle everything (rather than just the spoken Mandarin) allows The Subtle Body to be enjoyed by audiences who understand Chinese better than English. Isabelle Coler’s layered costumes help create a period feel, and I especially enjoyed Cate McCrea’s clever yet simple set: a moveable bamboo structure that evokes both a Chinese temple and the characters of Chinese writing. And Campisi’s script often draws clever parallels between two seemingly disparate topics – for instance, in the scenes where Charlotte and John each write letters home to their siblings. You certainly won’t come away from The Subtle Body knowing more about Floyer or his research on the human pulse, but you might just gain some insights into the myriad movements of the human heart.