To purchase tickets, visit RuthlessTheMusical.com or call Telecharge at 212.239.6200 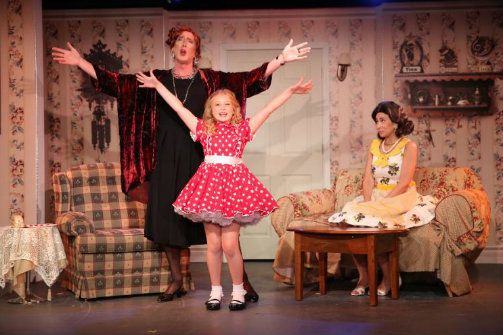 BOTTOM LINE: There’s no need to leave Manhattan for this summer camp: in Ruthless!, a demonic Shirley Temple makes for a deliciously vicious cocktail of a show.

Sweet little girls, while great as daughters or nieces, can be boring on stage. Have no fear—tiny Tina Denmark is anything but sweet. And this makes the revival of Ruthless!, the 1992 off Broadway musical hit, an ideal treat for those who enjoy the camp humor of female-driven cult classics like Mommie Dearest.

Tina Denmark (Tori Murray) is 8 years old, a talented dynamo who wants nothing more than to star in the school musical, her first step on the road to future stardom. Her father Frederick is VERY absent, leaving her gentle mother Judy (Kim Maresca) to nurture Tina's dreams. And nurture them Judy does—so much so that Judy identifies more as "Tina’s Mother" than as her own person (the commentary on today’s world of helicopter parents and spoiled youngsters is crystal clear). Along for the ride is Sylvia St. Croix (Peter Land in drag, per tradition), a mysterious woman who spies Tina performing at a retirement home and offers to help guide her career. But when Tina loses the lead role to Louise Lerman (Tracy Jai Edwards) and gets cast as the dog instead, she is PISSED. But at Sylvia’s suggestion, Tina also becomes Louise’s understudy. But with a jump rope in hand and a catwalk in sight, Tina’s not the understudy for long…sorry Louise.

The gleefully murderous tone of Ruthless! is best summed up in Tina’s response to her crime. When asked how she could kill a fellow classmate for a part in a school play, Tina responds matter-of-factly “Not just any part—the lead.” Which is not to say that her act doesn’t have consequences—it does, for everyone. But to reveal them here is to spoil much of what makes the second half of Ruthless! so enjoyable.

Writers Joel Paley and Marvin Laird have reworked this show a bit since 1992, trimming it from two acts to one and providing the occasional contemporary reference (the setting is "Here and Now"). But while a cast recording of that original version is available, it leaves out much of Paley’s hilarious book, which contains some of the best one-liners I’ve heard in quite a while; I’m still laughing at the especially twisted one about The Sound of Music. If occasionally some events seem random (why does Tina’s school theatre director visit her at home?), this only helps provide quick pacing and the ideal "devil may care" tone. And as for the show’s denouement—well, all I will say is fasten your seatbelts, because it’s going to be a bumpy night.

While Paley’s book is perhaps the strongest element, Laird’s music is also a delight, especially the show’s catchy title song. Also fun is "I Hate Musicals," sung by Judy’s adoptive mother, the theatre critic Lita Encore; as played by the terrific Rita McKenzie, Lita Encore suggests a blond Ethel Merman, yet is far more than just a simple impersonation. Indeed, the entire ensemble cast is strong, especially Maresca as Tina’s sweet, “talentless” mother and the tall, gangly Land as the world-weary, Bea-Arthur-esque Sylvia St. Croix. And playing Tina is Tori Murray, a ten-year old with a powerhouse voice.

Given the constraints of the space (Ruthless! shares St. Luke’s with other shows throughout the week), Josh Iacovelli’s sets cleverly shift from a retro Holly-Hobby-ish suburban ranch to, in the second half, a slick Manhattan penthouse. And especially enjoyable are Nina Vartanian’s costumes, which expertly walk that fine line between the colorful and the ridiculous. If John Grosso’s sound design struck me as a bit over-mic’d, I have no doubt you can hear it well even from the last row. Indeed, if I have any complaint, it’s that the show would come off even better in a more intimate setting—preferably with (non-virgin) cocktail in hand. And while the show’s website suggests that Ruthless! is "fun for the whole dysfunctional family!" (I saw more than a few kids in the audience), it still feels like a show aimed mainly at adults. It isn’t just the occasional curse word—the high-camp tone might be lost on those audience members who are Murray’s age (as, I suspect, it is somewhat lost on Murray herself).

While Ruthless! is certainly campy summer fun, there’s also a deeper message, if you feel like digging a bit. Talent can be a curse, a virus even, passed down from one generation to the next—it can take hold of you, possess you, and change you from a sweet little girl into an evil monster. But of course, the burden of such a curse is only felt by those with a conscience; if you’re lucky enough to be a talented eight-year-old psychopath, well then, watch out world!