By William Shakespeare; Directed by Brandon Walker and Erin Cronican
Produced by The Seeing Place Theater 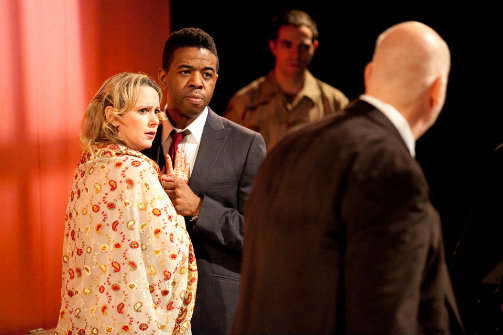 BOTTOM LINE: This Shakespearean tale of race relations, jealousy, and betrayal is updated to reflect the times with modern attire and technology and commentary on the current climate between the Middle East and America.

“For she had eyes and chose me.”

In gratitude and adoration, Othello (Ian Moses Eaton) relays how the fair and chaste Desdemona (Erin Cronican) came to gift him with her love and her hand in secret marriage. Her daddy Brabantio’s (John D’Arcangelo) response after going from being enraged to resigned?

“Look to her, Moor, if thou hast eyes to see. She has deceived her father, and may thee.”

If ever there were two telling lines that served as cornerstones in William Shakespeare’s 1603 script, these two could arguably be them. The first evokes the beauty and wonder that encircles these star-crossed lovers: Othello, a Muslim general, and Desdemona, a younger, and Christian, Venetian beauty. The second provides a foreshadowing of what will ultimately become the reason for Othello’s murderous jealousy and Desdemona’s fall from grace. Lightness and darkness of all sorts intertwine in The Seeing Place Theater’s passionate and bold production of Othello.

At first, things seem to be looking up for Othello. After a sorrowful past, he is now a triumphant general of the Venetian army, a husband to the most virtuous woman in town, and can claim at least two very good friends: Cassio (Logan Keeler), his faithful lieutenant, and Iago (the skillful and smarmy Brandon Walker), his loyal ensign. Whoops. Did I say loyal? Iago, playing the dutiful friend and junior officer, is not as genuine as he seems. Underneath his smiling face and false submission is a seething hatred for his boss. Why? Because his boss is black, is married to the catch of the city, and gave away Iago’s coveted job to Cassio. In an effort to destroy all who have angered him, slighted him, and those in between, Iago teams up with Roderigo (the fine Daniel Michael Perez), a rich man who loves Desdemona, to weave a tangled web of deceit and betrayal. His aim? To convince Othello that his beloved wife is having an affair with Cassio, thereby destroying the two men that have offended him. It isn’t long before the seed of perdition is planted and subsequently undoes all who are involved.

Othello is staged at what will hopefully become The Seeing Place Theater’s permanent home; the Clarion Theatre is an open theatre space with three sections for seating. Depending on where you find yourself, the view is fantastic. Others may not fare so well, and some key action scenes may be obstructed. You can chalk your misfortune up to the design of the space and your choice of seat, but Walker and Cronican’s direction could also expand to be more audience-inclusive. Despite some of the blocking, the duo does a great job of making Othello exciting. Characters pop out from the audience, and suddenly, patrons are being interacted with in a fun, engaging way. Though Othello’s themes are harsh, this production also plays up the language and some of the more jovial tones.

Another element that deserves cheers is the production design by Walker and Cronican. Some of the highlights are the very simple, yet ever-practical, set pieces and veiled background. Two rolling chests serve as beds, desks, and other furniture. Their use helps facilitate many scenes and are wonderful vehicles for the action. A red curtain smartly shrouds intimate moments and sneaky dealings.

To up the momentum and undulating moods in the play, dark electronic music and percussion are threaded throughout. Though the music underlines the scenes well, it sometimes crescendos above the projection of the character’s voices and distracts from dialogue. At one point, it was hard to hear what Iago was saying, and everything that Iago says is important. Still, this original score goes a long way to modernize the classic piece.

Another successful, albeit underused, modern spin is augmenting Othello’s Islamic roots. Right before Othello throttles his wife, he rolls out a mat, kneels, and prays to Allah. This is a nice, sensible touch that adds dimension to Othello's character, but it begs to be preceded by more. This little taste of Islam may make you wonder why the production didn’t have others.

But not all concepts succeed. When Othello meets with the senators for the first time, some are clad in short skirts and impossibly high-heels with smart-phones glues to their eyes. While cellphones are a clever and inexpensive way to introduce the technology needed for warfare into the plot, having Esther Chen and Brisa Freitas’ constantly peering into their phones lacks ingenuity. Another thing that could use work is a little more softness in Desdemona’s character. Although Cronican plays her as strongly and as assertively as she should, a little more sweetness to her nature, particularly when she interacts with Othello, would help sell the scene in which he kills her as “the lion slaughtering the lamb” a little more effectively.

The Seeing Place’s production of Othello is an exciting exhibition of what modern Shakespeare can be with a small budget. Although some improvements can be made, the heart and drive of the ensemble and all the hard work that they put into this show is worth experiencing.

(Othello plays at the Clarion Theatre, 309 East 26th Street, through March 15, 2015. Performances are Tuesdays through Saturdays at 7PM and Sundays at 2PM. Tickets are $15 and are available at seeingplacetheater.com or by calling SmartTix at 212.868.4444.)