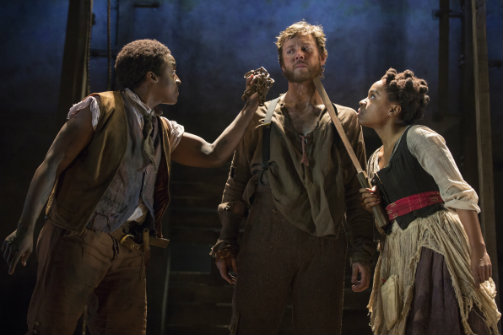 BOTTOM LINE: While seeking a ship to freedom, two runaway slaves encounter a different kind of trouble than they imagined, one that uncovers truths about their lives formerly concealed.

Moments before the rise of the curtain, a ghost-like regal figure (Tara A. Nicolas), clad in ropes and sheets, appears on stage. Deliberate in movement, she kneels beside a chair suspended by chains, pensive in thought. She rises and sprinkles dust around the chair as it is lifted to the ceiling. With mystique and sheer allurement, Naomi Wallace’s fabulous The Liquid Plain begins.

Set in a possible 1791 and 1837 in Bristol, Rhode Island (this play is not meant to illustrate any facts or specific history), The Liquid Plain unfurls principally on a dock that serves as the gateway to freedom. Striking scenic design by Riccardo Hernandez entices with stripped wood, earth tones, and bare essentials. The visuals are impressive and climb up several stories.

What is even more remarkable is that two escaped female slaves, Adjua (Kristolyn Lloyd) and Dembi (the androgynous Ito Aghayere), have managed to hide out and make a wretched life out of the raw and scant materials on the dock. Wretched, yes, but an upgrade from whence they came. While they wait for the arrival of a vessel that will let them leave behind their bonded lives, they come upon Cranston (Michael Izquierdo), a miserable specimen of a white man, who appears to be drowned through a hole in the dock. It isn’t until after they have relieved him of his possessions that he suddenly comes to, shocking them and intriguing the audience. Because Cranston has lost his memory, is sick with an infestation of worms, has no means, and is a threat to their discovery, he suddenly and ironically becomes Adjua and Dembi’s unwilling servant, toiling for food and survival. Unfortunately, Cranston also has an appetite for something else: Adjua’s body. Soon a tug of wills begins as the upper hand is exchanged from person to person, and mayhem in an already dangerous environment ensues. Some achieve their goals, others don’t, but everyone’s actions reverberate throughout the next forty years.

With Paul Tazewell’s superb costumes, Thom Weaver’s beautiful and shadowy lighting design, and Alex Koch’s subtle but powerful projections, The Liquid Plain takes us on a journey that at times looks familiar, and at other times is clearly only meant to exist in our dreams and nightmares. Koch’s projections and Wallace’s brilliant but talky script monitor the passage of time, but as we get to know the characters, we soon realize that they cannot move forward from the atrocities that have been committed. Concrete plotlines, juxtaposed with dream sequences, keep us on the edge of our seats and wondering about what will happen next.

One particularly haunting scene finds Bristol (the formidable LisaGay Hamilton), an educated British descendant of Adjua’s, conversing in a hallucination with the English poet, printmaker and painter William Blake (Karl Miller). Dead and suspended in a cage, Blake’s appearance serves as one of several supernatural elements in this play. Though likely to be magnificent without these mystical accents, The Liquid Plain is that much more enchanting with the inclusion of the unexplainable. Such moments provide touches of Edgar Allan Poe-like creepiness to a slave narrative.

Though the show is slow in parts, no space or time is wasted onstage. Director Kwame Kwei-Armah draws poignant, reflective, and utterly compelling performances from his talented cast. Lives are intertwined, several stories are told, and a handful of important themes, including gender identity. Not a frequent topic in 1800s slavery discussions, The Liquid Plain presents Dembi, a woman living as a man, in a practical way, staving off any attention-grabbing or sensational moments save for one where it is most effective.

Another important theme is the continual emergence and integration of the past. Though the subject of not forgetting the past is not new to this genre, The Liquid Plain treats this idea boldly and evocatively, etching an impression on our minds that is sure to last for a while. Human beings are beaten, starved, and cast into the sea, but in this drama, their stories and their importance bobble up to the top like buoys.

The Liquid Plain is one heck of a ride. Relevant in its context, but heart-breaking in its delivery, it captures you, keeps you, and dares you to open your mind to how things were, and most vividly, how things were experienced, the latter being starker and more impactful than the first.