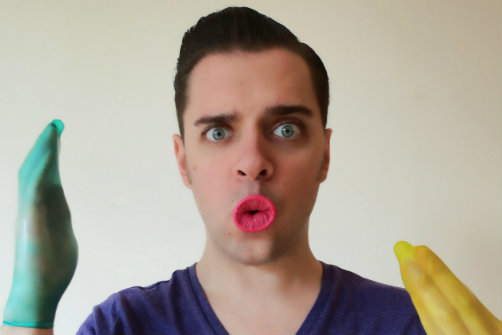 For many sexually active adults, STDs are an ever-present threat that one hopes to avoid at all costs. In his solo show Cootie Catcher, Lucas Brooks opens up about his personal experiences with several STDs, including gonorrhea, syphilis, HIV, and HPV. Not that he’s actually had all of them – he tells us before he begins that that is “for me to know…and you to find out.” But he’s had brushes with many, and these stories make up the bulk of this show.

After a brief introduction about his extensive sexual life (“a lot of people meet my butt before they meet my face”), Brooks brings out his “cootie catcher” – the folded paper fortune teller that you probably last saw in elementary school. He asks the audience to shout out colors and numbers from the cootie catcher to determine the next story (a piece of audience interaction that seemed superfluous, since I’m pretty sure his order of stories was pre-determined). The stories follow a pattern – fun encounter (described in detail) followed by suspicion of…something…followed by a trip to a health clinic – and they will likely invite identification from those in the audience who’ve had similar experiences (which is probably everyone). Along the way he touches on some important themes – the differing kinds of interaction one has with different health care workers (some are great, others terrible), the communication one expects (and sometimes doesn’t receive) from one’s sexual partners, and the stigma that comes from having, or even fearing one has, an STD.

Brooks is certainly an engaging performer with an extraordinarily expressive face. While at times I got the sense that he was working hard to remember a script rather than just telling us his stories, I also have the feeling this will get better as he continues developing this material. Less effective are the mini dance breaks he uses to separate his stories. I was also puzzled by the fact that PrEP (Pre-Exposure Prophylaxis, a daily pill that has been shown to effectively prevent HIV) only gets a passing mention. While it’s great that Brooks doesn’t just limit his show to HIV, there is such enormous discussion and debate about this topic right now (at least in gay male circles) that Brooks’ ignoring of it seems like a missed opportunity.

While I might have quibbles about Brooks’ choice of content, his overall message is certainly laudable – that the threat of STDs shouldn’t stop people from having sex in whichever way they want. Brooks is (among things) a Boylesque performer, sex educator, and blogger of IntellectualHomosexual.com, where he writes about many of his sexual experiences. And his sex-positivity comes through in Cootie Catcher – Brooks concludes by reminding us that STDs are just like other illnesses, the only difference being that “the way you got it was WAY more fun.” And given all the stigma around this subject, that’s a message that bears repeating.