Vestments of the Gods 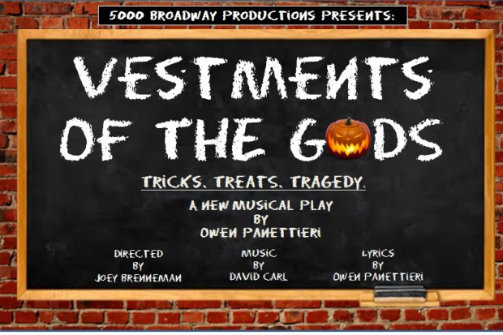 BOTTOM LINE: This new Halloween/Sophocles themed musical play shows a lot of potential and will surely have life after the Fringe Festival.

It’s Halloween at Thebes Street Elementary and after last year’s fight between students, Principal Creon has placed some strict rules on costumes. However, nobody thought to ban “vestments of the gods.”

When Hayden (Sean Bennett Geoghan) shows up to school dressed as Jesus of Fabulous, his friend Annie (Erica Diaz) quickly proclaims her normal clothing to be a costume of the prophet Mohammed. Classmate Lily (Molly McKenna Dillon) is outraged by the terrorist costume, and other classmates are quick to call the Fabulous Jesus a “Homo Hobo.”

Vestments of the Gods is a musical play that addresses bullying, specifically bullying of gay teenagers in the setting of Halloween at an elementary school. In addition, Vestments is a loose adaptation of Sophocles’ Antigone. The interstitial songs are very entertaining, as well as effective in moving the story along. (The score is by David Carl, book and lyrics by Owen Panettieri.)

With some trimming and clarifying, Vestments could be a very strong piece of educational theater. The script as it is now is very funny, but the ending seems to come on suddenly, and the chorus of children suddenly becomes a Greek chorus. However it needs to clarify the tone; it jumps too quickly from lighthearted Halloween story into the dark ending of Antigone with the death of two characters. If Vestments wants to be educational theater, it needs to decide how dark it wants to be.

The production is very smoothly directed by Joey Brenneman, and all the actors are excellent; Scott Schafer as Principal Creon, Jennifer Lauren Brown as Miss Mene, and Jennifer Cody as passionate parent Vera Harper all deserve special mention.

Overall Vestments of the Gods is a very polished and strong offering in the Fringe Festival. Costumes by Erin Michelle Routh and set by Elisabeth Svenningsen are also impressive for the transient nature of the Fringe. Notably, the production is produced by Tony Award winner Lin-Manuel Miranda and his father Luis A. Miranda. With these heavy hitters in their corner, Vestments can only get stronger, and no doubt has a life outside Fringe.