The Turn of the Screw

Off Off Broadway, New Play
Runs Through 11.2.14
The Morris-Jumel Mansion, 65 Jumel Terrace 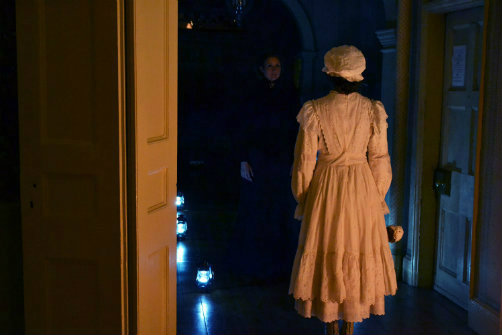 Leslie Marseglia and Leslie Gauthier in The Turn of the Screw. Photo by Kyle Rosenberg.

BOTTOM LINE: A sufficiently chilling, though not quite riveting, adaptation of Henry James’ classic ghost story, presented in the beautiful historic Morris-Jumel mansion.

Henry James’ famous and frequently adapted 1898 ghost story The Turn of the Screw tells the story of a governess who comes to a mansion called Bly to care for Miles and Flora, two charming children. She is assisted by Mrs. Grose, the housekeeper, who knows more about the mansion’s sinister recent past than she lets on. After seeing the ghosts of two former house servants, the governess takes it upon herself to protect the children from the spirits’ malevolent presence.

Considering the haunted locale of the story, it’s very fitting that Everyday Inferno stages its adaptation of James’ novella in a tiny room in the Morris-Jumel mansion, which has a bit of a ghostly history itself. Those who love historic houses are recommended to take some time before the show to look around the mansion, which contains gorgeously furnished and well-kept rooms that prominent historical figures such as George Washington and Aaron Burr lived in.

At the beginning of the play, we meet a group of people who have come together for a party. As they enter, one of them is just wrapping up a grisly ghost story. After the rest of the partygoers applaud, another one of them named Douglas (Scott David Reeves) mentions that he once knew a governess who had quite a tale to tell. He decides to tell her tale to the group, and we are launched into the dreary world of Bly.

Jamie Wylie’s adaptation of the novella is fairly straightforward. However, this is easily the most ensemble-based adaptation of The Turn of the Screw this writer has ever seen. As the Governess’ story unfolds, the partygoers double as characters in her story. They also provide a running commentary throughout, which provides some comic relief.

An important aspect of the novella that Wylie and director Anais Koivisto have honored is its ambiguity. We never know if the governess is really seeing the spirits, or if she’s going mad. This is emphasized by Ms. Smith’s performance as the Governess, which strikes the perfect balance between sympathetic and paranoid. The rest of the cast contributes nicely, especially Sam Ogilvie as the charming Miles, and Leslie Marseglia, who is chilling as Miss Jessel, the female apparition.

The Turn of the Screw is a story that has the ability to both scare you and make you think. Director Koivisto has provided many suspenseful moments, and the sudden noises and jump scares are wonderfully executed. However, as someone who knows the story well, the play doesn't offer much beyond the opportunity to see the gorgeous Morris-Jumel mansion. Additionally, the partygoers’ running commentary somewhat deflates the story’s suspense and lessens its potential impact. Perhaps this production would be best enjoyed by those who love site-specific theatre (the intimate setting really is perfect for this story) and those who aren’t familiar with Henry James’ novella.

(The Turn of the Screw plays at the Morris-Jumel Mansion, 65 Jumel Terrace, through November 2nd, 2014. Performances are Thursdays-Saturdays at 8PM and Sundays at 6PM. Tickets are $18 and are available at brownpapertickets.com.)