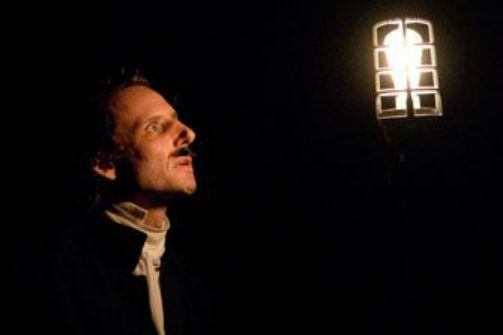 BOTTOM LINE: One of the most interesting and adventurous musicals in recent memory, based on the last train journeys made by Edgar Allen Poe.

Red-Eye to Havre de Grace is an exciting, new action-opera/musical. At first it seems challenging to create a musical on the subject matter here: What would it sound like if Poe's otherworldly, deeply felt writings were set to music? What type of music should be used? The creators of this work, Thaddeus Phillips and the Wilhelm brothers, have made something unique. The 90 minute piece is composed and performed by Jeremy Wilhelm, who sings and plays a clarinet and a guitar, and David Wilhelm, who plays an eerie, amplified prepared piano that merges with a perpetual soundtrack reminding us of trains.

Indeed, the piece is about traveling. Set in September of 1849, it follows Poe's last journey on earth from a lecture tour in Virginia to New York. What we don't know is that he never made it to New York, but was instead on a different train, traveling south. He was spotted by a sharp-eyed train conductor who recognized him wearing a stranger's clothes, headed to Maryland, where he would die just days later.

The piece transforms the stage into a realistic yet surreal landscape, using only three rectangular tables and a patch of grass. These minimal items are creatively turned into a train compartment, living room, hotel lobby, corridor, attic, and even a comforting lawn where Poe lays barefoot. Actor Ean Sheehy brilliantly transports a living, breathing 40-year old Poe from 1849 to the stage at the New York Theatre Workshop. Sheehy's portrayal is of a man who is human and real, in contrast to the mystified version in popular culture. Poe's torments and inner struggles are personified by the omnipresent Alessandra Larson, who plays a ghostly, mischievous version of Virginia Poe, Poe's beloved wife/cousin who died young. Ms. Larson dances above and below the stage to the choreography of Sophie Bortolussi, and the image of her grows ever greater until the torment completely consumes Poe.

Director Thaddeus Phillips intentionally takes Poe out of his time period and brings him to us, where Poe interacts with the only other actor/musician on stage, Ranger Steve (Jeremy Wilhelm). Steve is a character who claims to have traveled up from Philadelphia and is normally stationed at the Edgar Allan Poe House of the National Park Service. The picture created is beyond time, and the music, contemporary yet unrestrained by eras. Just like Eureka, E. A. Poe's final work, it is beyond the boundaries of our imagination. As Poe states, "It was for those who feel rather than to those who think -- to the dreamers and those who put faith in dreams as in the only realities...You know, they took me to prison once for being drunk, but I was not, it was about Virginia. I was never really insane, except on occasion that my heart was touched..."

The ending is especially poignant; the storyline is much more humorous than it is dark, and the production is a rare opportunity to experience a refreshingly unique musical.