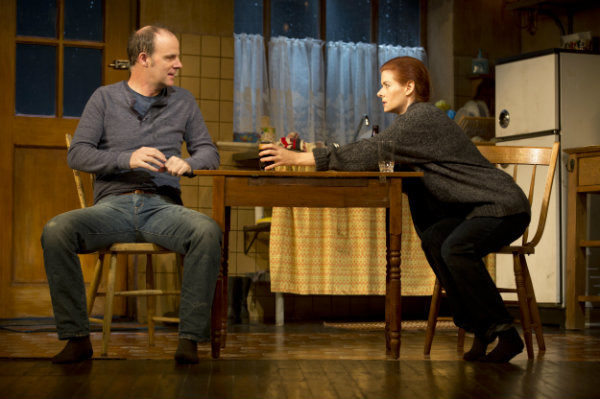 Brian F. O'Byrne and Debra Messing in OUTSIDE MULLINGAR. Photo by Joan Marcus.

BOTTOM LINE: A solid production of a charming play with a phenomenal performance by Tony winner Brian F. O'Byrne.

Monsooned in the Irish countryside, two middle age misfits who grew up together on neighboring farms are now trying to find something that is theirs. Each watches the years slip away, watches his or her last parent fade, and watches the other. They are willing enough to fight for land and ownership, but will either fight for the thing that will truly make them happy?

Anthony Reilly (Brian F. O’Byrne) has worked on the family farm all his life, but his father Tony Reilly (Peter Maloney) is convinced his son doesn't love it. Rosemary Muldoon (Debra Messing) was the county beauty, but she spurned all men and earned a reputation as a chain-smoking misanthrope. Rosemary and Anthony’s parents were never able to settle a disputed strip of land, and when Rosemary’s father dies, Tony makes a play for the property so he can sell the whole farm instead of passing it on to his son Anthony. In a twist, the widow Muldoon (Dearbhla Molloy) didn't inherit that specific land and can’t sell it; Muldoon gave the land to his daughter, and Rosemary will never sell. Will these families resolve their sparring? Will these misfits find a place?

While the play proves funny and sweet in turns, the sum is banal. There is no furnace at its core. The narrative meanders through vignettes by happenstance, and only sparks when if arrives at the final scene. The play concludes with a wonderful scene between Messing and O’Byrne during which I suddenly thought, “Oh, THIS is the play!” While I’ve heard of saving the best for last, I left the theatre questioning the play’s ramp up to that final, meaty scene.

The script lacks coherence, both in the meandering scenes, and also in the tone. The level of silliness is inconsistent; there is a wacky turn in the final scene that lies well outside any absurd hints in the preceding dialogue. Ultimately, I felt like I saw a really good play that wasn’t the best version of itself (yet).

The performances are remarkable. Maloney and Molloy are obvious veterans, with timing and tone that belie a foundation in Martin McDonagh's plays. Messing plays a less charismatic character than fans are used to but still delivers the laughs audiences expect. The show hangs on O’Byrne’s leading man stage presence, nuanced talent, and engrossing ethos.

It’s interesting to compare this to Shanley’s recent plays. Last season at Atlantic Theater Company, his play Storefront Church presented a modern politician in the Bronx, and he has put out several shorter plays ranging in topic from a psychic in Tennessee to a wealthy middle aged man and his Russian object of affection at his New England beach house. It seems to me that Shanley is playing with milieus and exploring lots of different characters and cultures. Now he gives us two families in rural Ireland. I don’t think that’s inherently good or bad, but I personally find it admirable, and I applaud the effort to find new territory.

With that said, I think Outside Mullingar could be another of Shanley’s great plays. The show has interesting characters in a sympathetic situation with high stakes. But it isn’t all the way there yet, and who wants to go to Broadway and see a show that's "fine"?