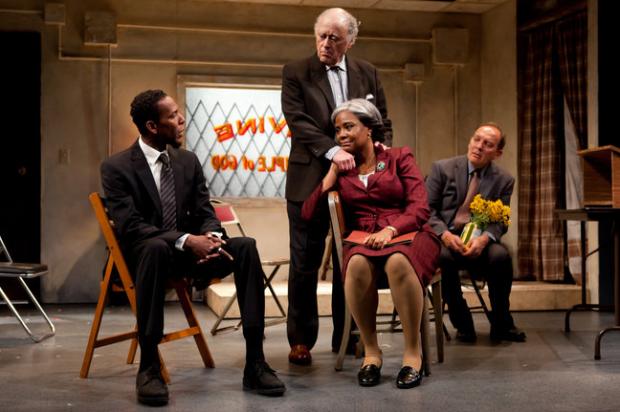 BOTTOM LINE: Storefront Church is a neatly-drawn contemporary play about right, wrong, and getting what you need materially and spiritually.

Storefront Church tells the story of an up-and-coming politician from the Bronx whose somnolent spirituality is reawakened by a minister who has lost his way. Donaldo Calderon (Giancarlo Esposito) is a preacher’s son who turned to civil duties for his good works. Family friend Jessie Cortez (Tonya Pinkins) is in danger of foreclosure, but won’t ask her tenant Chester Kimmich (Ron Cephas Jones) to pay his back rent because he is the minister of a storefront church that he has yet to open. Cortez’s husband (Bob Dishy) gets no leeway from the loan officer (Zach Grenier), so Cortez solicits Calderon’s help; his political connections include business he is doing with the bank CEO (Jordan Lage). When Calderon and Kimmich meet, both are deeply affected by one another.

Written and directed by John Patrick Shanley (Doubt), this production at Atlantic Theater Company exemplifies the auteur artistry possible when a writer has the capability to direct his own work. All elements of the production are crisp and cohesive. The acting is uniform and confident. It is clear that this show is translated directly from the page as only a writer could.

Because of this subdued design and direction, the script and the cast shine. At first Tonya Pinkins's characterization of the Dominican Cortez jars expectations, but the specificity and genuineness of her portrayal soon shine through -- we all know this woman, and Pinkins brings her to life for us with zeal. Dishy is an implacable steam engine of energy and effusiveness. Esposito is charismatic and compelling. Lage plays the bank CEO with assurance and the right touch of schmarm. Jones brings an honesty and earnestness to the minster Kimmich. And Grenier steals the show with his uproarious comic turn as an awkward, palsied dweeb.

There are some missteps in the production, but they are few. For instance, the play employs an odd convention where characters reveal their vulnerability in no-dialogue vignettes where the character is alone on stage at a park bench interacting with a prop and emoting. Also, the production features my prop pet peeve: a drink container that clearly contains no liquid; actors cannot interact in the same way with such a container because the weight is too light. But these are minor infractions easily forgiven with this truly exemplary show.

Storefront Church gives an unexpected look into the journey of a group of very real people. The production is fast-paced, unexpected, and intriguing. Shanley gives his signature ambiguous characters and varying points of view, allowing the audience to fully understand and examine all aspects of a situation and decide for themselves. Storefront Church is a well-written script, neatly staged and precisely acted. It's the perfect show if you're looking for solid, safe straight theater.

(Storefront Church plays at the Atlantic Theatre Company, 336 West 20th Street, between 8th and 9th avenues, through July 1, 2012. Performances are Tuesdays at 8PM; Wednesdays at 2PM and 8PM; Thursdays and and Fridays at 8PM; Saturdays at 2PM and 8PM; and Sundays at 3PM. Tickets are $65 and can be purchased at the box office, online at ticketcentral.com or by calling 212.279.4200. For more show info visit atlantictheater.org.)