Tickets are $15-$75 with the lowest priced tickets available on a first-come, first-served basis.

All tickets will include dinner along with the performance.

Off Off Broadway, Theatrical Experience
Extended through 7.14.14
The Flea Theater, 41 White Street 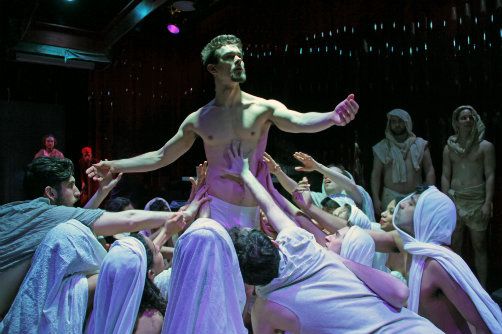 Colin Waitt as Jesus and the cast of The Mysteries. Photo by Jonathan Hollingsworth.

BOTTOM LINE: An epic theatricalization of the Greatest Story Ever Told -- 48 playwrights, 53 actors, and six hours!

Ed Sylvanus Iskandar and the Bats are back for what is becoming an annual tradition at The Flea -- an epic extravaganza of theatre, food, and style. Following 2012's These Seven Sicknesses and 2013's Restoration Comedy, The Mysteries brings 48 playwrights together to rework the Bible and create a modern day interpretation of the “mystery plays” of the Middle Ages. Don’t worry, though, you don’t have to know theatre history to enjoy The Mysteries -- you don’t even have to know the Bible, really.

I missed Restoration Comedy, but two years after seeing These Seven Sicknesses I’m still raving about it, so I couldn’t wait to see this latest marathon play. In the tradition of expectations, The Mysteries didn’t live up to my grandest hopes, but I continue to love the mingling of ensemble and audience and spirit of community and social theatre that Iskandar has mastered. This grass roots, communal vibe is particularly appropriate for this show’s subject matter; the bonds of religious and ethnic tradition in the Old Testament and the spirit of love in the New Testament are made more resonant through the social, ensemble presentation of The Mysteries.

Amid this monumental production’s successes are three stunning accomplishments: the beautiful blending of tones between the words of 48 diverse playwrights, the utilization of the full talent potential of this massive ensemble, and the clarity of the design and direction while sampling time periods and styles. Beyond these feats of thought and finesse, once again the power of The Flea's resident acting company, the Bats, is unmistakable: they are young, beautiful, talented, and indefatigable.

Despite the triumph in flow between episodes in The Mysteries, the three acts are divergent. The first part deals with the Old Testament, and is lovely and theatrical, but a lot of ground is covered quickly, and the narrative skims the history like a skipping stone hitting only key moments. The second part is the tightest, focusing on the birth of Jesus through the crucifixion. Then in the third portion, the story picks up from the crucifixion and falls to chunks of philosophy, discussion, and an out-of-place streak of metatheatricality. I personally would have enjoyed more consistency, but there is an interesting parallel to be drawn between the myriad interpretations and perspectives on religion and the varied structure of this play.

The Mysteries also delves into the radicalness of Christianity -- a viewpoint that many seem to have forgotten. It’s so refreshing and honest to see the disciples as a band of loving idealists and to see all the bible characters through a counterculture lens. This script not only captures the spirit of love, community, and hope amid Jesus and his disciples, but also honors the traditions and teachings of the Bible without becoming entangled in the veracity of the mythology.

As a catch-22, I did find myself wishing the show had more of a point of view. The unwillingness to either confirm nor deny the existence of God or take a position on spirituality and religion became muddy. In this production so many choices are made with such confidence and clarity that even when I don't love them, I accept them as part of the piece, but I could not fully forgive the ambivalence. There is an amazing scene in the third part when two Brooklyn girls meet and clothe Jesus; it is the most moving and poignant five minutes in the entire six hours -- plus it’s funny -- and I appreciated the sentiment. This beat is crammed in the midst of the most chaotic part of the script, like a tonic note in the cacophony. I thank Lloyd Suh, who penned this resonant, hopeful, and humble scene that proposed a spiritual existence without imposing restrictions on what it must be.

While the true star of The Mysteries is its accomplishment as a behemoth of theatre and design, the audiences stamina over six hours relies on the vibrant performances by a fabulous ensemble that despite its size utilizes the diverse collection of talent it contains. Standing out among these are Alesandra Nahodil who won the audience as a sympathetic Eve then stole the show as a badass Herod; Kyle Hines who is unaffected and charming as Adam; Allison Buck who gives kindness, strength, and fight to Mary; Asia Kate Dillon as a Lucifer with a conscience; the melodious Alice Allemano as Garbiel; and Colin Waitt whose charisma and openness carry the lion’s share of the show as Jesus.

For me, though, the star of the production is the costumes. I was fascinated, impressed, and envious in turn. I’m currently trying to recreate one of the shirts, and am already planning a new winter style based on Allemano’s coat. The costumes are stunning, brilliant, and beautiful; they are the alpha and omega that God (Matthew Jeffers) proclaims to be. No wonder they needed a six person team -- give Loren Shaw as many people as she needs to create this caliber of design!

The Mysteries is a creative, ambitious, and substantial play on a Biblical scale (ba-da ching!). I think the beginning is stronger than the end, but I was thoroughly invested in both the story and the theatricality. This play invites the audience not only to eat but also to engage in dialogue with the piece. I left wanting to go back to a mass and also hit up my favorite Williamsburg bar. If you have six hours to invest in a production that challenges you and challenges theatre, come down to the Flea and as a bonus you’ll also see beautiful actors and get a delicious meal.

(The Mysteries plays at the Flea Theater, 41 White Street, through July 14, 2014. Performances are Mondays, Thursdays, Fridays, and Saturdays at 6:30PM; and Sundays at 4:30PM. Tickets are $15-$75 with the lowest priced tickets available on a first-come, first-served basis. All tickets will include dinner along with the performance. Purchase tickets by calling 212-352-3101 or online at www.theflea.org. $100 VIP tickets are also available.)