A Map to Somewhere Else 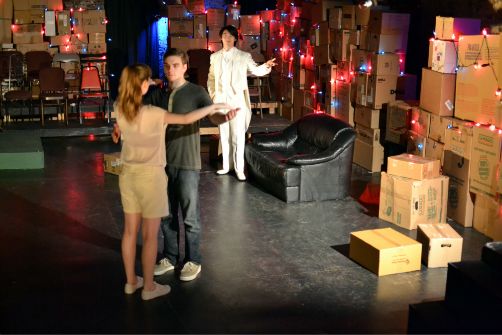 Case Watson, Jay William Thomas, and Eddy Lee in A Map to Somewhere Else. Photo by Anaïs Koivisto.

BOTTOM LINE: Explores the forgotten childhood fantasies we all leave behind, and how they continue to resonate in us even as adults.

Who was your imaginary friend? Did you have more than one; perhaps like some you had an entire imaginary world. A Map to Somewhere Else confronts the terrifying and magical consequences our imaginary worlds face when we leave them behind for more adult concerns. In this play imagination and reality collide creating a story that is touching, funny, and at times frightening. This is not the sanitized children’s fantasy we are often presented with when discussing young imagination. Here human failings and morbid magic live side by side with fuschia bunnies and fantastical musical numbers. It is this honesty about children’s imaginations and capacity for storytelling that make the piece seem so real and connect so deeply.

Natasha (Meghann Garmany), Constantine (Jay William Thomas), and Emily (Case Watson) are college students in our world. Natasha uses a biting wit to mask a deep emotional pain, Emily is so loyal and pure of heart it is slightly annoying, and Constantine embodies all the social fumbling that can make young men so adorable. On its own the interactions and discoveries of these characters could be a play, a very good play even. However, playwright Reina Hardy has more to show us. As the characters begin to know each other, cracks begin to appear in their reality. Strange characters appear, magical moments begin to happen, and very quickly it becomes clear that this play spans two worlds.

The actors do a wonderful job of straddling these two worlds, not to mention giving depth to their characters and executing some rather athletic fight scenes. To be sure, these are young actors to watch. In particular, Garmany is superb as the barb tongued Natasha. Lila Newman also deserves praise for her engaging performance as Frangibelle, the witch.

Director Anaïs Koivisto has done an extraordinary job combining the talents in this production into a unified vision. The set design by Ryan Bates is realistic, yet just whimsical enough for us to believe the moments of intruding fantasy. Made almost entirely of cardboard boxes, the set is mutable and adapts seamlessly to the requirements of each scene. The setup in the round is interesting, though at times sightlines are slightly obscured. The lighting design by Elijah J. Schreiner is effective; the hanging lights in particular are a treat. There is a surprising amount of stage combat in the second act, and Jon Meyer is to be commended for keeping the actors and audience safe while creating interesting and provocative fight scenes. Overall, this piece is a great example of what a talented team with competent direction can produce.

This is an incredibly interesting story that explores an area most people neglect after they grow up. As children we create entire worlds, complete dramas, whole lifetimes within ourselves. After watching A Map to Somewhere Else I feel foolish for ever considering that time and those ideas as somehow separate from myself. These narratives we created and the characters that inhabited them do not simply vanish when we reach our tweens. They continue to live within us and affect our thoughts and actions. While deeply compelling as a performance, the most interesting part of this experience occurred after I left the theatre. I spent my train ride home attempting to piece together the imagined histories from my own childhood.

(A Map to Somewhere Else plays at 133rd Street Arts Center Lab, 308 West 133rd Street, through June 28, 2014. Remaining performances are June 22nd at 5PM and June 23-28 at 8PM. Tickets are $16 and can be purchased by visiting AMTSE.brownpapertickets.com. For more information visit http://www.everydayinferno.com/AMaptoSomewhereElse/.)