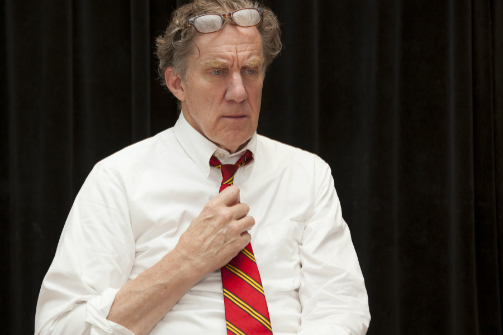 BOTTOM LINE: Nick Wyman seems to channel William Kunstler in this poignant and politically savvy reminiscence about the legendary attorney’s most important cases.

Several months before he died, famed leftwing lawyer William Kunstler [1919-1995] gave a keynote address at an unnamed New York City law school. Many of the students were unhappy with his selection and as Kunstler opens, the audience hears picketers chanting their litany of objections: "Kunstler is a traitor; Kunstler is a self-hating Jew; Kunstler is a terrorist; Kunstler must go."

But he doesn’t go. Instead, Kunstler delivers a riveting 90 minute monologue -- with occasional interjections by a student moderator named Kerry (played with a mix of anger, arrogance, and bemusement by Gillian Glascoe) -- that highlights the many cases that galvanized his reputation as brash and smart. Indeed, for several decades -- from the Civil Rights era to the mid 1990s -- the poor, the disposed, and the militant had a friend in Kunstler. Veteran Broadway actor Nick Wyman, as the controversial attorney, not only looks like the man, but seems to embody his energy and spirit.

As Kunstler describes his most important cases -- as well as his evolution from a suburban lawyer specializing in wills and estates to a man considered by many to be a social justice icon -- he is witty, charming, and compelling. Self-deprecating humor is on display. “What do you call a lawyer gone mad,” he asks. The answer: “A senator.”

Despite these forays into laughter, Kunstler’s overall message is serious, and as he speaks about his work representing progressive activists he gives the audience a crash course in “using our understanding of the law to serve higher goals.” On his agenda: dismantling racism, protecting the right to dissent, and improving living conditions for the poor, the incarcerated, and the needy. His work led him to represent Freedom Riders in the 1960s, as well as the Chicago Seven, the Black Panther Party, the American Indian Movement, and the prisoners who rebelled at Attica State Prison in 1971. Later, he defended Yusef Salaam, one of the men accused of rape in the Central Park Jogger case. Muslims who experienced discrimination based solely on their faith also found their way onto his roster. What’s more, he represented John Gotti and other reputed mobsters.

Kunstler’s choices were clearly not everyone’s cup of tea and when moderator Kerry confronts him about his representation of people who are generally reviled by bourgeois society -- she seems about to explode as she confronts him in the play’s denouement -- he is unequivocal and unapologetic. “I don’t need to remind you that everyone needs a defense,” he thunders.

Kunstler celebrates the man and his work, without turning him into a saint. His womanizing is mentioned and he would not have won any father-of-the-year awards. That said, despite a tight, well-crafted script, there are references that may befuddle those who are unschooled in the history that is showcased. Still, Kunstler’s optimism about the possibility of social betterment is contagious and one leaves the theater heartened about the possibility of creating a more just, world. It could not be more perfectly timed.

(Kunstler plays at the Steve and Marie Sgouros Theatre, 115 MacDougal Street, through August 23, 2014. Remaining performance is on Sunday 8/23 at 9PM. Tickets are $18 and can be purchased at fringenyc.org.)