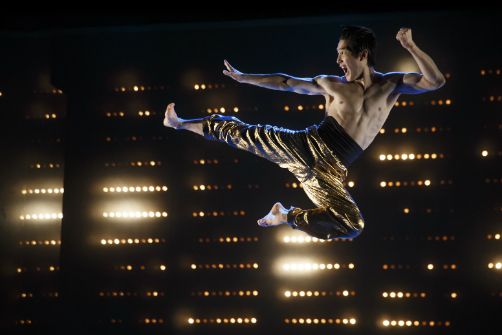 For more than three decades, David Henry Hwang has been an incredibly prolific playwright and librettist, best known for his Tony Award-winning landmark play, M. Butterfly, and more recently for razor-sharp works such as Chinglish and the brilliant Pulitzer Prize finalist Yellow Face. Over the last two seasons, Hwang has been the Signature Theatre’s featured playwright, with revivals of Golden Child and The Dance and the Railroad. Now comes the world premiere of his latest piece, Kung Fu, a study and celebration of the life of Bruce Lee before that actor’s brief but explosive career as an action film icon.

Starring 2012 “So You Think You Can Dance” finalist Cole Horibe, Kung Fu takes a delightful turn early on when it reveals itself to be, in fact, a musical, or as Hwang and director Leigh Silverman have called it, a “dance-ical.” This involves the cast frequently breaking out into choreographed movement that evokes martial arts routines, Cantonese Opera sequences, and/or street gang brawls. Sonya Tayeh is the choreographer, but she is ably assisted by Jamie Guan, a longtime collaborator with Hwang and an expert on Chinese Opera. Emmanuel Brown, a member of the onstage ensemble, serves as the production’s fight director. It’s important to note that both the cast and the audience at the performance I attended were having a ball during these sections, which were often lit to galvanizing effect by designer Ben Stanton.

Unfortunately, on paper the play remains too much of a sketchy and sequential bio-drama to do justice to its subject. Hwang’s goal here is to both humanize Lee and to present a compelling portrait of someone who definitively transcended the racist stereotypes—in Hollywood and beyond—of the weak, Asian male. And there are moments in which he succeeds, in no small part thanks to Horibe, a martial arts champion and dancer with few acting credits to his name. It would be tempting to sit back and say, “So you think you can act?” But, actually, he can, and he holds his own with the excellent Phoebe Strole (from the original cast of Broadway’s Spring Awakening), who plays Lee’s wife, and the ever-terrific Francis Jue, who plays his disapproving father. (Jue’s connection with the playwright dates back to the 1988 Broadway premiere of M. Butterfly.)

But, although most of the action is centered on a mere dozen years prior to Lee’s breakout roles in 1970s Hong Kong action movies, there’s still too much skimming along the surface and not enough deep exploration of the complex racial and personal issues that ran through his life. Here’s a speedy flashback to eight-year-old Lee, played by Bradley Fong, demonstrating out of the blue a prodigious talent for Cantonese Opera. Here’s Strole stumbling through the door, suddenly pregnant. (If you guessed with future action star Brandon Lee, a trivia point for you.) Here’s a meeting of Hollywood executives debating the merits of casting Lee as the Green Hornet’s sidekick for the short-lived, but now legendary TV series of the late 1960s. These are all brief, often amusing scenes. But Kung Fu is unable to sweep through this landscape of events with the fully fleshed out characters or incisive scrutiny of many of Hwang’s earlier works, including those with the epic scope of M. Butterfly. It’s possible that sharpening the focus to an even narrower section of Lee’s life would afford that opportunity. Meanwhile, the father-son conflict between Jue and Horibe descends fairly quickly into melodrama, complete with a far too literal battle at the former’s graveside.

In addition, Silverman tends to cut corners with her acting ensemble. Some offer absorbing portraits, such as Clifton Duncan, an African American actor who is very convincing as the decidedly un-African American movie star James Coburn. And Fong, who plays both Bruce and Brandon as young boys, is an expressive but economic young actor. When Jue commands him, in a training scene, to “use the eyes,” Fong does so, to a subtly hilarious and endearing effect. He’s also a dynamite martial artist, incidentally, as are the others. But some of the remaining ensemble members are, unfortunately, less successful at filling in the missing dimensions to this incomplete work.