Off Off Broadway, New Solo Show
Runs through 8.15.14
The Players Theatre, 115 Macdougal Street 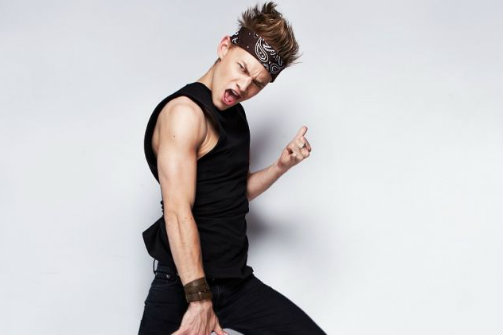 BOTTOM LINE: This may be your last chance to see this this future rock star comedian for only $18.

The 24-year-old hot Aussie comedian Joel Creasey is doing stand-up comedy in a theater festival, and if you have a problem with that, "you can call it storytelling." It actually is both and more. While watching Creasey you get the sense that you're watching the likes of Eddie Izzard circa 1982. Rock God is sharp, intelligent, and extraordinarily Gen Y in its approach. Joel Creasey so obviously will become internationally famous that he had the gumption to create a show about becoming famous and his own childhood fandoms. Right now you can see Joel and this show at the NYC Fringe Festival before you have to settle for Netflix.

Joel Creasey: Rock God centers around the idea of celebrity heroes. He asks the audience at the start of the show about some of their real-life encounters with "rock gods," or rather ridiculously famous people. He is getting a run for his money in New York compared to his hometown of Perth, Australia, as for instance the audience I attended had members who were next door neighbors with Julia Roberts and Bryan Cranston. Creasey relishes in American pop culture though - and politics, as he describes his year after high school spent campaigning for Hilary Clinton in California.

Creasey's comedic styling truly makes you believe you're the first audience being let in on these stories. It seems perfectly natural (and maybe it would be) to invite him out for a drink after the show and continue the conversation. A more savvy fan of comedy though will note just how ingenious and meticulously written and directed by Janelle Koenig his hour-long set is. Creasey's ability to mock himself and his heroes, while simultaneously showing the utmost respect, is masterful. Furthermore, there is an amount of humility to this young and "out" hero-worshiper. He tells us how his mother wondered in his teenage years why all of his role models were women, like a Belgian tennis star and a middle-aged Australian comedian.

If you want an example of how quickly Creasey is rising up the ladder, you can also catch him all this week opening for Joan Rivers. His awkward physicality and brute honesty is refreshing. Creasey's tales of sleeping with his mother's Zumba instructor, being a ball boy for Australian professional tennis, and apologizing to a Hell's Kitchen gay bar over a microphone for the atrocities of 9/11 all seem too real to be false. Joel is more than your new favorite comic; he's your new best friend from Down Under. Grab your leotard and come on down to meet him.

(Joel Creasey: Rock God plays at The Players Theatre, 115 Macdougal Street, through August 15, 2014. Remaining performances are Thursday 8/14 at 7PM and Friday 8/15 at 3PM. Tickets are $18 and are available at fringenyc.org.)