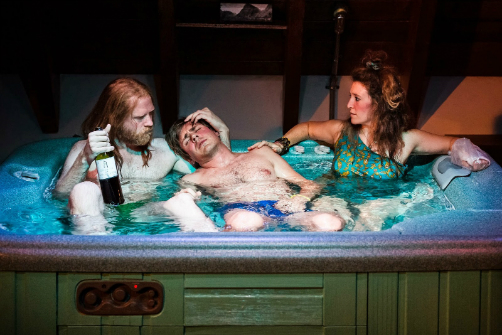 BOTTOM LINE: In this comedy with bite, a wealthy father and son encounter two strange grifters at their ski resort in early '90s Colorado.

If there’s one thing The Debate Society is great at, it’s the long con, presenting layer upon layer of genres and ideas as they explore quirky characters in detailed settings. In Jacuzzi, we are in a Colorado ski lodge in the early '90s, watching two laid-back grifters enjoying the suds while reading child psychology books. And while there are plenty of laughs throughout, underneath the surface bubbles an eerie dread as we try to uncover who these people are and what exactly they’re doing in this lodge.

Helene (Hannah Bos) and Erik (Paul Thureen), the grifters, are enjoying the newly built jacuzzi when Bo (Chris Lowell) arrives unexpectedly to meet his father Robert (Peter Friedman), who owns the ski lodge. Surprised by the two strangers, Bo nervously flits around the lodge before Helene and Erik invite him to stay the night to enjoy the suds and a bottle of wine. Before long, Bo drunkenly reveals too much information before passing out, and Helene and Erik seem a little too excited by what they’ve just discovered. When Robert arrives the next day, Helene and Erik (who is suddenly referred to as Derek) are recruited to help Robert pack up all of his ex-wife’s belongings. Soon the pieces of Robert and Bo’s past slowly tumble into place, while Helene and “Derek” loom in the background, poking up unexpectedly and teasing out secrets.

The first thing one notices when walking into Ars Nova is the incredibly detailed set by Laura Jellinek. It is truly a character in itself, enhanced by Bradley King’s sometimes beautiful, sometimes creepy lighting and M. L. Dogg’s sound design. The entire atmosphere of Jacuzzi simultaneously oozes naturalism and surrealism. The hilariously period costumes by Jessica Ford highlight moments of goofiness, such as when Bo struts around in his clunky ski boots. But when some paper mache masks (props by Noah Mease) appear, I must admit it did send a chill down my spine.

Under Oliver Butler’s impeccable direction, Bos and Thureen’s script bursts to life. The performances are top notch. Bos is hilariously charming at one moment, then silently terrifying the next. Thureen literally towers over everyone, creating an uneasy dynamic whenever he’s onstage. Friedman brings such earnest sweetness to Robert’s attempts to make friends with Helene and Derek, but it is his moments with Lowell’s Bo where we see the father-son dynamic play out, which seems at the heart of the play. Lowell is clearly the stand-out, pulling the most duty with the complicated, mostly unlikeable Bo, which he somehow makes charismatic. Jacuzzi may seem like fun and games, but there is danger lurking underneath.