To purchase tickets visit itsonlyaplay.com or call Telecharge at 212-239-6200

It’s Only A Play 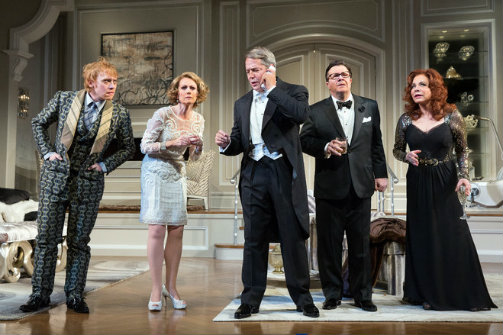 BOTTOM LINE: A perfectly fine diversion, with a whole lotta stars. It’s Only A Play is only “okay.”

That ever-familiar beast -- the star-studded revival -- has reared it’s synthetic head again. Perhaps a less monstrous metaphor is more suitable for this production of It’s Only A Play. Though this species of celebritized entertainment runs rampant on Broadway, this particular animal lacks the teeth necessary to make a lasting impression. Terrence McNally’s semi-satirical comedy about Broadway on Broadway is a bit of pleasantry about as fleeting as the turn of a page in your Playbill.

It is no surprise that a celebrity line-up including Nathan Lane, Matthew Broderick, Megan Mullally, Stockard Channing, F. Murray Abraham, and Rupert Grint will put butts in the seats, and those butts will howl with laughter when properly cued. After all, this constellation of a cast pulls from every subset of stardom; whether they be Tony-winners, sitcom sensations, Oscar-winners, recent graduates of a major movie franchise, or Betty Rizzo, this panoply of celebs comes from every walk of entertainment life in an effort to make a play targeted to the 1% of theatre-goers appeal to the wide range of patrons populating the Schoenfeld Theatre.

It’s Only A Play takes place at the lavish apartment of first-time producer Julia Budder (Mullally), where the opening night party for a new play by Peter Austin (Broderick) is underway. With a hot, young, British director (Grint) at the helm of their production, and Oscar-winning actress Virginia Noyes (Channing) making her hopefully-triumphant and hopefully-sober return to Broadway, the group eagerly awaits their first reviews. Joining them in anticipation are James Wicker (Lane), a longtime friend of the playwright who turned down a part in the show, Ira Drew (Abraham) the most hated critic in New York, and a fresh-faced cater waiter (the only non-celeb up there, Micah Stock in a splendid Broadway debut).

Perhaps the most impressive part of It’s Only A Play is McNally’s ability to follow a formula so light and frothy that it screams for high schools and community theatres, but so specific and insular that only a fraction of theatre connoisseurs will appreciate all the inside jokes. After all, it is not everyday that names like Will Eno and Young Jean Lee get bandied about alongside Lady Gaga and Shia LaBeouf. McNally does some heavy revising to his play (originally written in 1982) to make it resonant with today’s Broadway community. The effort certainly pays off as he skewers popular targets like New York Times critic Ben Brantley, and even his own leading man, Nathan Lane. But every jab gets a heavy dusting of sugar sprinkled on top so as to delight rather than offend.

As a send-up of Broadway and the theatre world, It’s Only A Play is an enjoyable enough way to spend an evening, but so it watching The Birdcage or Will & Grace -- and that doesn’t cost $100. Although this cast (the main ticket draw here) all do well, we have seen them excel in these types of roles before, and they turn out the exact performances one anticipates based on their familiar personas (with the exception of F. Murray Abraham who wonderfully stretches himself into a different type of character than typically appears on his resume). There is nothing especially wrong with this revival, but it doesn’t hit the bullseye either. Under Jack O’Brien’s directorial hand, the play delivers plenty of laughs, but rarely brings the audience to a place of hysterical euphoria, and it sticks with you for about as long as it takes to walk to the nearest subway. But hey, it is only a play after all, so if you are in fact in the market for a hilarious revival, and you want to see some terrific celebrity performances, Telecharge also sells tickets to You Can’t Take It With You.