By Howard Barker; Directed by Richard Romagnoli
Produced by the Potomac Theatre Project 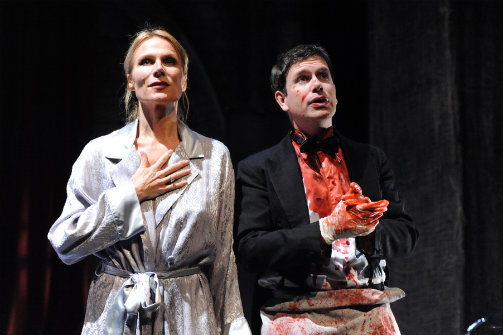 BOTTOM LINE: Gertrude -- The Cry is a twisted spin-off of Hamlet focused on Gertrude's sexuality, and may be worth seeing if you're tired of traditional Shakespeare productions.

Gertrude -- The Cry is playwright Howard Barker’s response to Hamlet, or rather, his rewriting of Hamlet focused on Gertrude’s sexuality. Produced in London in 2002, Potomac Theatre Project brings the play to New York for the first time in their summer repertory season at Atlantic Stage 2.

The Shakespearean characters that remain in Gertrude are Hamlet, Gertrude, and Claudius. Horatio, Fortinbras, and Ophelia have been replaced by a much more stable love interest, Ragusa (well played by Meghan Leathers) and Albert, Duke of Mecklenberg, as Hamlet’s buddy (played by Bill Army). Also new to the story are the mother-in-law Isola ("Orange is the New Black’s" Kathryn Kates, in a scene stealing performance) and servant Cascan (an also strong Alex Draper).

You are warned as you enter that the production contains female nudity, which they get right to in the first scene.

“Fuck me!” Gertrude cries to Claudius, as they stand over her husband’s body, shortly before Claudius pours poison into his ear. The plot focuses on the sexual relationship of Gertrude and Claudius and mostly Claudius’ desire to hear her titular orgasmic “cry” again. Ragusa pops in as the young female companion for Hamlet, and Albert as the friend who is obsessed with the idea of sleeping with Hamlet’s mom. Hamlet is barely at all concerned about the death of his father, not moved enough to cry, but more focused on his mother and the dysfunction of what’s happening in his family.

The cast of PTP’s production is excellent overall and provides dramatic depth to an uneven script. Pamela J. Gray brings charisma to her intense, committed performance as Gertrude and makes her quick shifts of emotion believable, and David Barlow brings an exciting manic energy to Hamlet.

The problem with Gertrude -- The Cry is not PTP’s production of it, but with the play itself. Rather than what could be an interesting feminist take on Hamlet, Gertrude is narrowly focused on sex and all aspects of it. Gertrude as a character is steely and cold, and seems only concerned with high heels and lipstick, in addition to sex. Nothing about Barker’s characterization of her makes us care enough to see what happens to her after two hours and twenty minutes. The first act feels extremely long, and the tone of the second act feels like a different play.

The overwhelming amount of crude and sexual humor of the first act wasn’t personally enjoyable to me, but the rest of the audience seemed to be enjoying it. The material often passes parody into the camp territory. Director Richard Romagnoli makes the valid choice to play up the absurd quality of the material rather than letting it take itself too seriously. The plot is often confusing as it veers from the original story and does not give the audience markers to help you understand. Romagnoli does a solid job of walking this line between adherence to the text but not too much. The strong cast is also extremely committed to each other and to the material.

I’m not entirely sure what Barker was trying to accomplish with this play, but for those interested in reworkings or reimaginings of the classic Shakespeare tragedies we know so well, rather than seeing another production of Hamlet this summer, PTP’s Gertrude - The Cry may be worth checking out.