Written by Allan Miller, based on a novella by D.H. Lawrence; Directed by Jordan Dann
Produced by Jaded Eye Arts Collective 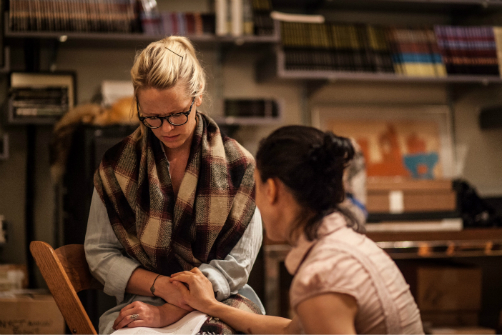 A scene from The Fox. Photo by Simon Snogles.

BOTTOM LINE: A World War I era domestic tableau is disrupted when a stranger comes calling, leading to an intense power struggle in this well-crafted and unsettling production about gender, sexuality, domination, and greed.

Nellie (the excellent Clea Straus Rivera) and Jill (the equally excellent Elizabeth Elkins) have been living in domestic bliss for almost three years. Their lives are settled and they’ve made a comfortable, if basic, home for themselves in the British countryside. Nellie, the more butch of the two, does most of the heavy lifting while Jill does the cooking, cleaning, decorating, and household management. The arrangement works. Although money is tight and there is a bothersome fox afoot, they are happy with one another and with the life they’ve created.

This abruptly changes when a uniformed stranger named Henry (well played by Matt Savins, the play’s producer and the founder of the Jaded Eye Arts Collective) knocks on their door and explains that he is looking for his grandfather. As the story unfolds, we learn that the soldier had lived in their home with his granddad before joining the military and going to war. He seems stunned to learn that the patriarch has died, a sentiment that touches Jill deeply. In short order, she is begging Nellie to let Henry stay with them during his five-day respite. After all, they have room, and she is excited about the prospect of a changed routine. Nellie is initially resistant; nonetheless, she ultimately relents.

And therein lays the scenario that upends their lives.

In short order, Henry assumes a stance of macho provocation, boldly declaring that they need a man in their lives. As he saunters about, strutting his excellent marksmanship and ability to coax eggs out of recalcitrant hens, he poses an overt challenge to sassy and independent Nellie.

Although she is somewhat annoyed by him, Henry’s sense of adventure, along with his optimism and wide-eyed curiosity about people, places and things, intrigues Nellie and causes her to wonder if she is making the most of her time on earth. But does Henry really care for Nellie, as he says he does? Is she beginning to have feelings for him? Might she leave Jill -- for a man? What’s more, Nellie worries that Henry’s romantic overtures might be disingenuous. Is Jill right to see Henry’s actions as a thinly-veiled ploy to reclaim his grandfather’s property? Or is she just jealous of her manly rival? Needless to say, they’re vexing questions.

As you’d expect, as the play evolves, tensions mount and it becomes abundantly clear that the situation cannot end happily.

The Fox explores a host of relevant, palpable themes about love, sexual attraction, fidelity, loyalty, and the ups-and-downs of living a staid, settled, existence. Although the story was written by D.H. Lawrence 91 years ago, Allan Miller’s play adaptation stands the test of time. A nicely wrought, early 20th century living room provides a cozy setting for the drama, and the sounds of chirping birds, cackling roosters, and a prowling fox on the hunt for food add an eerie overlay to the production.