Don Juan, or The Wages of Debauchery

Written and Directed by Vit Horejs 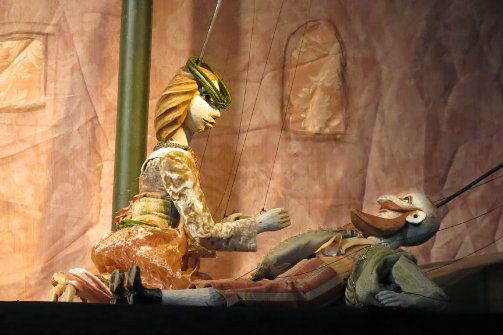 A scene from Don Juan, or The Wages of Debauchery. Photo by Jonathan Slaff.

BOTTOM LINE: The puppets dazzle even if some of the comedy fizzles.

In 1984, Czech puppeteer Vit Horejs discovered 69 remarkable marionettes aged 50 to 150 years old at the Jan Hus Church on the Upper East Side. He has since founded the Czechoslovak-American Theatre with fellow Czech transplants, directed 20 string-puppet plays, published numerous translations of Czech puppet plays, produced a documentary on Czech puppetry, and even acted in a Woody Allen film in his spare time. His is a remarkable story of a New York theatre artist; and so it is with a heavy heart that I report that their latest production, Don Juan, or The Wages of Debauchery, does not often captivate in terms of storytelling or the deceptively simple art of performing comedic dialogue.

The journey to the Jan Hus Playhouse hidden underneath the Jan Hus Church is one of those charming New York theatrical finds that is so on the fringe that you only hope you’ve unearthed a true undiscovered theatrical gem. It is a low-tech environment in what is essentially a cafetorium. Gathered around a small stage and enclosed in black curtains is a live piano player welcoming the audience. Everyone is excited to see the exquisite wooden carved puppets in action, and they do not disappoint. They instantly emit life and energy with the slightest pull of a string.

The story that ensues is an adaptation of the opera Don Giovanni (even with some piano sampling from the opera). Don Juan was considered a top “hit” of the 18th century Czech marionette repertoire. The prologue, as performed by Horejs and his fellow puppeteers, is among the highlights of the evening. It recaps Don Juan’s sexual escapades in a slapstick manner. The focus on the puppetry is what makes the opening of the play excel – from there on out the dialogue is what cuts the strings out from under it.

The characters include the historical Don Juan, who in this story is more of a hardened criminal than just a womanizer. He is a murderer who needs to skip town to avoid the authorities. He is accompanied by his servant Kasparek (a stock Czech puppetry character) who embodies the ever bumbling gluttonous comedic sidekick. The talented voice and performance by Theresa Linnihan is the most specific and energetic of the evening. The cast is rounded out by family, victims and ingénues in Don Juan’s comedic killing spree. In addition, there are the appearances of a few supernatural characters providing for some incredibly impressive puppetry design.

The pacing of Horejs’ production is the real culprit of the frustration I felt in audience member. Dialogue that has the potential to be delivered quickly for comedic timing is lingered upon to the extent that the entire play runs at about 30 minutes longer than it could without changing anything more than picking up on lines and shticks. Hopefully some of these low points can be remedied as the run of the production continues since much of the slow pacing appears to be a symptom of memorization and the fact that English (which the play is performed in) is a second language for some of the cast.

White the material is appropriate for all ages; the storyline becomes difficult to follow even for a theatre critic familiar with the source material. However, just seeing these gorgeous antique puppets in action is nearly worth the visit. The script, written by Horejs, is actually quite funny and could soar with sharper performances and well-rehearsed bits. All of the comedy is built on the rules of repetition and threes which we are familiar with from everything from commedia dell’arte to vaudeville to The Three Stooges. This is why there is such an inherent expectation for expertly crafted timing.

As of now, the production is resting on the laurels of Horejs’ impressive academic background in Czech puppetry and less on the ability to bring these wonderfully eccentric characters to life in a fun and clear direction. While the set design is intentionally low budget, it still requires more tending to and purpose. The puppets are the stars of the play, as they should be, but the performers are holding them back from a delight which I suspect exists within this classic comedic take on a European tradition.