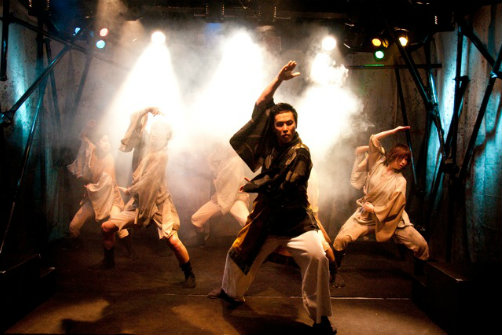 BOTTOM LINE: This new Japanese musical is a moving and remarkable feat of storytelling through intense movement, choreography, and song.

Dancing Monk Ippen, a new musical from Japan, epitomizes the essence of what the New York International Fringe Festival promises: cross-cultural exposure. This is a Japanese story starring Japanese actors, singers, and dancers performed in Japanese riffing on the American musical format while maintaining Japanese theatrical conventions. The result is an 80 minute viscerally engaging experience with little need to understand exactly what is being said onstage. (Although I envied the Japanese speakers in the audience).

Nevertheless, the story is there for you to read in the program and there are a handful of key moments with English narration. It is a testament to the clarity and specificity of the performers that it is easy to translate through examining the heightened archetypal poses of the actors. Director Hiroaki Doi has staged the play to each angle of a bend of the wrist. Ikumi Sugamoto stars wonderfully as Ippen, an actual 12th century Japanese samurai who turned into a Buddhist monk whose dancing Buddhist preaching flourished among the people in Japan.

Theatrically, Ippen is fascinating in the simple conventions used to such powerful effect. The choreography by Chie Nakagawa is beautiful in its minimalism. The fights are remarkably engaging and real, especially since they are done through miming swords and weapons all timed to a highly detailed sound design. A slow motion fight scene is especially impressive in its Matrix-esque precision. Credit must be given to the sound operator Natsuki Maruyama for being as essential in the timing of as much of the entire show as the performers.

What inspired me most while watching Ippen is the hyper presence of these performers on stage. They are absorbing and engaging even in stillness. There is so much focus in every motion that it is nearly overwhelming. The show is also simply a joy to watch. The energy of the cast is infectious culminating with a full procession and dance party into the house after the curtain call. Ippen is a window into what is clearly a vigorously talented musical theater culture in Japan, and it's thanks to the producers and the NYC Fringe Festival that it's only a subway ride away for the next week.

(Dancing Monk Ippen plays at Loretto Theater at Sheen Center, 18 Bleecker Street between Lafayette and Bowery, through August 15, 2014. Remaining performances are Monday 8/11 at 7:15PM; Wednesday 8/13 at 2PM; and Friday 8/15 at 4PM. Tickets are $18 and are available at fringenyc.org.)