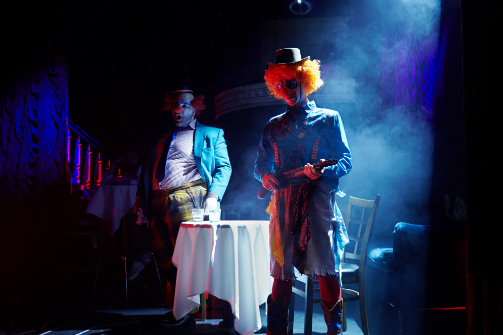 A scene from Clown Bar. Photo by Suzi Sadler.

BOTTOM LINE:  Clown Bar is a wacky noir-comedy that will have you laughing at a troupe of unpredictable clowns -- though not for the reasons you would expect.

As I sat down at a tiny cabaret table at The Box, the Lower East Side home of Adam Szymkowicz’s noir-comedy Clown Bar, a nearby stranger asked me: “are you afraid of clowns?” Thankfully, I responded in the negative; otherwise, I would have likely been paralyzed by Clown Bar’s gritty and gruesome world of underground clown-crime, populated by some once-jolly circus troupers who now get their kicks through sex, drugs, and murder.

Clown Bar’s plot is relatively straightforward: Happy (an appropriately debonair Shane Zeigler), a detective, returns home to investigate the death of his kid brother, Timmy (Dan Tracy), crossing paths with some dangerous mobsters along the way. What makes this murder mystery so engaging, however, is Szymkowicz’s sickening circus twist on the genre; here, the “dangerous mobsters” are a collection of wayward clowns, their painted faces and purple wigs disguising their morally questionable impulses, and Happy, our hero, is a former clown himself, removed from this hard-knock life before it could corrupt him for good.

If this all sounds ridiculous, let me assure you: it is. Part of Clown Bar’s charm, however -- and many of its laughs -- come from the sheer absurdity of this unorthodox genre blending. A climactic scene between Happy and the ringleader who orchestrated Timmy’s death, for example, is silly rather than suspenseful when we realize that said ringleader is actually Bobo (Andrew Farmer), a disheveled and deviant clown. And while the show sometimes relies too heavily on sexuality to generate some giggles from its audiences, there is something amusing about seeing Happy reunite with Blinky (an electric Claire Rothrock), his clown ex-girlfriend, for a passionate tryst.

As was the case with its previous incarnation at The Parkside Lounge (read Theasy’s review of Clown Bar’s 2013 run here), Clown Bar is somewhat environmental in nature. Audience members are offered red foam noses as they enter the space, and are encouraged to don them as they venture into the cabaret-style venue (beautifully done-up by set designer Andy Yanni and lighting designer Joe Cantalupo) in which the performance occurs. Additionally, director Andrew Neisler has his actors roam freely amongst audiences throughout the performance and, while this called for some occasionally uncomfortable neck craning, this was an effective choice to truly immerse audiences in this unfamiliar world of seedy clowning.

While it may not be an ideal evening out for those with a long-standing fear of clowns, Clown Bar is an entertaining look at the darker side of professional happiness. But even as the guns go off and the end looks bleak, you should not take it too seriously. This is about clowns, after all -- so sit back, put on your red nose, and let yourself laugh.