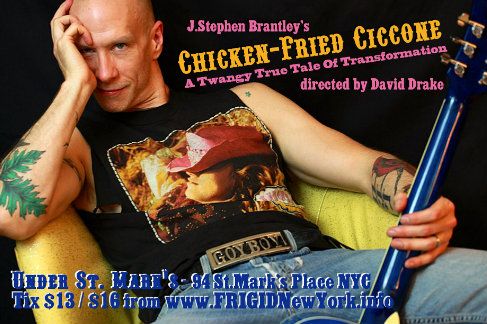 BOTTOM LINE: A biographical one-man show about a gay man overcoming a heroin addiction through the power of Madonna.

Chicken-Fried Ciccone could alternately be titled Confessions on a Not-Dance-Floor. Writer/performer J. Stephen Brantley draws on Madonna’s 30-year career of music to assist him in telling his true-life story as a heroin junkie. Brantley takes us from his first time snorting the stuff -- a seemingly innocent “just this once” moment with a new friend -- through years of deadbeat relationships and unwavering addiction, and finally to his current state: clean, happy, and steadily partnered.

Brantley’s story is dark and intimate; he recounts true moments of desperation, including eviction, homelessness, prostitution, desperate withdrawals, and losing friends to overdose, but steers just clear of a drab sob-story by peppering his tale with carefully selected lyrics from Madonna’s oeuvre, which he croons country-style as he picks a guitar.

One of the most effective aspects of the show is this careful curating of songs, the majority of which most anyone would recognize. By embedding these songs -- which most people would view as lighthearted pop music (“Into the Groove,” “Vogue,” or “Turn Up the Radio” from her most recent album) -- into a story about heroin addiction, Brantley shines a new light on these songs and reveals how a big fan and careful listener (as, obviously, he is) can draw some pretty profound meaning from the Queen of Pop’s vast collection of songs.

Furthermore, it cannot be denied that Brantley has a story to tell. He’s a native of Texas who came to New York to pursue a career in theatre but, like so many others, his dreams got waylaid by the many temptations of the City that Never Sleeps. His story has a little bit of early '90s East Village history, some starstruck “there’s Madonna!” moments, and a happy ending (I’m not giving away too much here, as the show’s very existence depends on one).

Brantley’s concept toes the line of the self-indulgent one-man biographical show (come on, we’re all familiar with those), which is particularly apparent in the several false endings -- the audience gave their final applause about three times before the show was actually over, which is worth noting for possible future revisions. However, the rather effective integration of lyrics that must be near and dear to Brantley, as well as the few heart-stoppingly emotional moments (both sad and happy) which punctuate the otherwise “that’s all over so now I can joke about it” style of storytelling, provide some rather powerful redemption in this story of, well, redemption.

As it goes, I’m left with just one nagging question: Where’s the fried chicken?