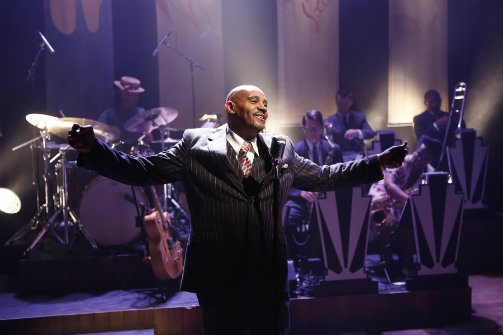 Café Society Swing is a jazz and blues revue of songs made famous by legendary performers like Billie Holiday and Lena Horne. I was delighted that the songs were not overexposed jazz standards, but lesser known gems that I had a wonderful time discovering, and they are expertly performed by this sensational ensemble of musicians. The show is so successful as an evening of music that I wished it didn't take place in a theatre at all, but at a smoky jazz club with a glass of my favorite scotch. The biggest problem with Café Society Swing is that it is being presented in a theatre.

Written by Alex Webb, who is also the music director and plays the piano as nimbly as Fred Astaire dances, the show tells the story of the Café Society, the first integrated jazz club as well as the club responsible for launching the careers of musical giants like Sarah Vaughn, Big Joe Turner and Count Basie among many others. The first act is hosted by a journalist who struggles with the dilemma of whether to report that the club’s founder, Barney Josephson, is a Communist sympathizer, which would effectively shut down the place. By the end of the first act he decides not to pursue the story. Act two is narrated by a bartender at the Café Society who then morphs into Barney Josephson himself. All three roles are played brilliantly by Broadway veteran, Evan Pappas, the show’s token theatre artist.

As talented of a musician as Webb is, he has a rougher time as a dramatist. His script offers characters that are merely designed to disseminate historical information, and Webb discards each one as soon as they’ve served their use. A better approach might be to consider the central character as the club itself, and then seek to bring that club to life.

It would be great to see this show in a jazz club that doubles as the Café Society. Let the brilliant musicians bring the house down the way they would have in the original club, and intersperse the performances with staged moments that might have actually happened at the Café Society including Barney Josephson’s tragic announcement that his liquor license was revoked. As an immersive theatrical experience, it might just be an unforgettable evening. Currently, it's a first-rate music event being presented as a second-rate piece of theatre.

Still, the opportunity to hear these musicians at work is a special treat, and I now find myself Googling the individual vocalists and downloading their music. I am a new fan of Cyrille Aimée, Allan Harris and Charenee Wade, and I am grateful that I now know their names and can seek out more of their work. If you want to hear great jazz, you’ll find it in this show. But I find the advice given to me by an old musician appropriate here: “it is not necessary to see but to hear.”