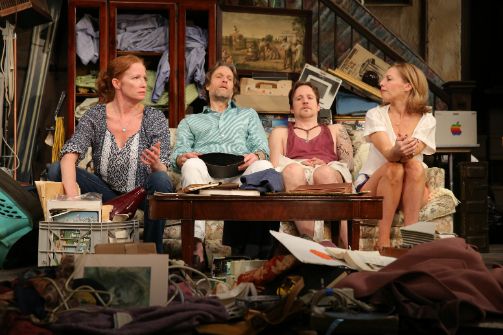 It all begins with the sound of cicadas, insects that come out of the ground every thirteen years to mate. In complete darkness, their chatter fills the whole theatre for what seems like five minutes straight. Then, at last, two flashlights illuminate the living room of a former plantation home in southeast Arkansas. Franz (a captivating Patch Darragh) and his girlfriend River (Sonya Harum) enter through a window. Nope, they’re not thieves. They’re just the first of many we’ll see arrive at the cluttered home of Franz’s recently deceased father. The time has come for three siblings to deal with hundreds of items and the house as a whole: a final decision must be made regarding a plan to sell the house to pay back half a million dollars in loans that Dad took out twenty years earlier. In the process -- as is the case with plays in which dysfunctional families reunite -- drama will resurface and secrets will emerge. The play’s title is most relevant to a certain questionable item found in the mound: a gruesome book of lynching photographs.

The world that Jacob-Jenkins asks these performers and designers to dive into is beyond hectic. Clint Ramos’ set is so filled to the brim with, well, everything, that you almost can't believe actors are going to fit. I don’t think I’ve ever seen so many props assembled, actually. Piles and piles of games, books, toys, cooking utensils, clothing, blankets and tapes (including a VHS of Big Daddy that I was close enough to see) litter every inch of the stage to the very, very edge. The actors, under the nimble direction of Liesl Tommy, impressively create clarity out of chaos. As each character accuses, points fingers, shouts, hits, chases or sulks over one thing or another, we in the audience are not only able to keep up but to shift sides as new (crazy! intense! brilliantly theatrical!) information is thrown our way.

Oldest child Toni (Johanna Day, providing the most sensitive, heartbreaking performance) is a drinker and the only one to defend her dead father. Sure, this lynching book is inappropriate, but he was a good man who was there for her. Middle child Bo (Michael Laurence) tries to keep the peace between Toni and his wife Rachel (Maddie Corman), who was once on the receiving end of Dad's anti-semitic slur. Franz’s dark past involves sex with a minor; one sibling seeks to forgive him while one certainly does not. Also in the mix are Bo’s kids Ainsley (Alex Dreier), who discovers the photos, and Cassidy (Izzy Hanson-Johnston) who has a little crush on Toni’s son Rhys (Mike Faist). Yup, that’s her cousin.

Appropriate is smart and perceptive, particularly when it touches upon sibling rivalry. The way the three adults squabble, pit each other against each other and struggle with forgiveness is believable and relatable. The relationships -- painted so crisply and clearly in Jacob-Jenkins’ script -- are presented in a stirring and accessible way by Tommy and her cast. A moment where the photos go missing and one by one each family member points a finger at someone else is a remarkable feat of pitch-perfect timing. A stage combat sequence involving hair pulling and falling down is as rousing as they come.

Some characters are more thinly drawn than others (compare the all-over-the-map Bo to the deep, three-dimensional Franz) and sometimes over-dramatic staging threatens to undermine Jacob-Jenkins’ powerful words. But for the most part the production is a home run. With MVPs like Day and Darragh going to bat, it’s not hard to see why.