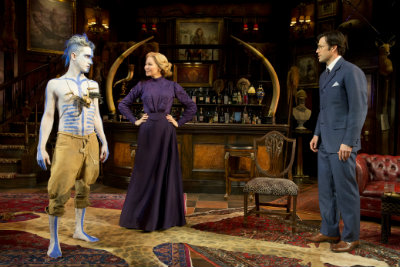 BOTTOM LINE: You will laugh. You might even ooh and ahh. Then you will get on with your life.

The Explorers Club is among the silliest plays I’ve ever seen. This is not a criticism. It’s pure comedy, and nothing else. Literally nothing. Social and political issues -- such as women’s rights, imperialism, and science vs. religion -- make cameo appearances but don’t interfere with the non-stop hijinks.

Even people who do not like plays will like The Explorers Club. It’s pretty straightforward: a group of so-called “scientists” convene at their gentlemen’s club in London to discuss their studies, experiments, and travels. The year is 1879 and there are animal skins and shrunken heads everywhere. Enter a lady explorer who has located a lost city and returned to civilization with one of its inhabitants in tow. One member of the club is in love with her. Another is violently opposed to her presence. Still a third just wants to seduce her. Add in a venomous snake, a fast-growing exotic plant, and flying glasses of brandy and -- voila! -- comedy.

The Explorers Club was written by Nell Benjamin, best known for adapting Legally Blonde for the Broadway stage, and directed by Marc Bruni (Old Jews Telling Jokes). Their mission is clear: get laughs. They are assisted in this by a great cast of character actors. Jennifer Westfeldt, the actress-filmmaker responsible for Kissing Jessica Stein and Friends with Kids, is delicious as the brilliant and bold Phyllida Spotte-Hume; David Furr, who recently trod similar ground in The Importance of Being Earnest for the Roundabout, is perfectly ridiculous as Harry Percy, an adventurer with more bravado than smarts. Also on hand are theater institution John McMartin, as a crotchety “archeotheologist,” and Arnie Burton, whom I have seen in four shows in the past three years and who always leaves an impression.

As befits a play set in Victorian England, the sets and costumes are total eye candy; audience members like myself who fetishize all things British will swoon at the accents, facial hair, and Gilbert & Sullivan jokes. But don’t come expecting a new classic. Despite the setting, this is not on par with the works of Wilde or Shaw. It’s not even trying to be. It contains exactly one moment that approaches emotional realism or poignancy: shy botanist Lucius Fretway (Lorenzo Pisoni), enthralled by Phyllida’s intelligence as well as her beauty, defends his passion for plants against charges that they are boring and unmanly. It's a lovely speech. Then we quickly move on to a series of mishaps that have the audience hooting with laughter.

Is The Explorers Club essential? No. Is it funny? Yes. Is there an ostrich in it anywhere? Despite the image on the show’s poster, no. But there is a man covered in blue body paint. So that’s all right, then.