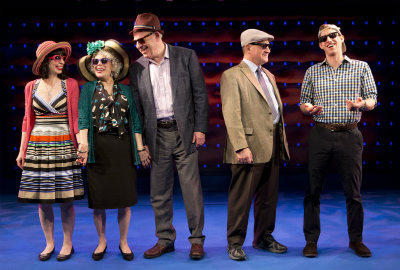 BOTTOM LINE: An engaging and funny window into secular Jewish culture and the subversive potential of laughter.

Fifty years ago, a tiny Brooklyn bakery ran ads that turned the company into a household name. “You Don’t Have to be Jewish to Love Levy’s,” their billboards exclaimed. And it was true — people of every ethnicity and race enjoyed the “Real Jewish Rye” that gave the bakeshop its glory.

The same can be said of Old Jews Telling Jokes, but while you don’t have to be Jewish to enjoy the show, viewers need to be at least somewhat familiar with Yiddish and secular Jewish culture. The five-person ensemble — three middle-aged adults and two thirty-somethings — sing, dance, and crack non-stop jokes, often at their own expense. Among the themes: dating and courtship, marriage and sex, childbearing and rearing, and money and business. What’s more, quips about the Jewish community’s neurotic preoccupation with health, safety, and the inevitability of death are on plentiful display.

The humor is often ribald — there are penis jokes aplenty as well as wisecracks about intercourse, oral sex, and infidelity. Debbi (Audrey Lynn Weston), for example, reports that her man had the words “I love you” tattooed on his schlong. “I told him to stop trying to put words in my mouth,” she deadpans.

While many old tropes are trucked out (anyone who grew up in or near a Jewish home will recognize that much of the schtick celebrates such time-honored comedians as Woody Allen, Shelley Berman, Alan King, and Mort Sahl) it also gives an erect middle finger to the bosses, landlords, schmucks, and schmendricks who conspire to bring us down. “Tell your worldly troubles to fuck off for a while,” the cast sings in an opening number. Minutes later the audience is reminded that “there are times when it’s okay for a Jew to be a ham.”

It’s funny — and yes, sometimes corny — stuff. Occasionally, however, the sexism is glaring and the Jewish mamma stereotypes are more annoying than amusing. Still, this is a small criticism in an otherwise well-acted and well-written production.

At one point in the show, both Reuben (Bill Army) and Morty (Lenny Wolpe) offer brief, seemingly autobiographical, anecdotes about the role of humor in their families and their digressions give the play needed grounding. Finally, Bunny (Marilyn Sokol), whose rubber-faced antics showcase the power of physical comedy, works overtime to ensure that no one leaves the theater with a frown. Indeed, stellar timing and zinging one-liners make Old Jews Telling Jokes a charming, if lightweight, experience.

In addition, David Gallo’s set — a huge piece of matzo on a background screen with a smaller, moveable screen in front onto which a host of images are projected — is clever and enhances the production.

There are jokes about pickle slicers, real estate, and laughing in the face of persecution and hatred. There are songs about Chanukah in Santa Monica and a rendition of Old Man River like you’ve never heard before or imagined. Parrots, retirement, old age, Angelina Jolie, and a ukulele also wind their way into the script. Surprisingly, however, neither religion nor politics have a place in the production. Instead, the stuff of everyday life comes to the fore as the cast hammers home a particularly Jewish concept: Humor, regardless or time, place, or situation, is never inappropriate. In fact, more often than not, it's the best cure for what ails us.