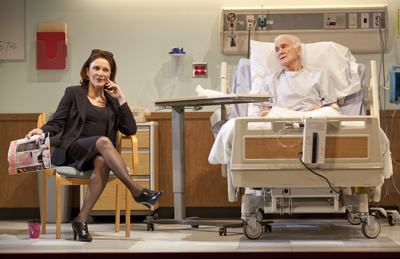 Linda Lavin and Dick Latessa in THE LYONS. Photo by Carol Rosegg.

BOTTOM LINE: An extremely dark comedy with a powerhouse performance by Linda Lavin.

After a sold out run at The Vineyard in 2011 (read the Theasy review here), Nicky Silver’s new play, The Lyons, has found a much deserved home at The Cort Theatre on Broadway. The Lyons is an edgy, dark comedy that tells the story of a seemingly well-to-do family gathering at the hospital as the patriarch of the family is facing his impending death from cancer. Family secrets get revealed, the daughter struggles to stay sober, the dying father swears like a sailor, and on top of all that, the soon-to-be-widow can’t settle on a new design for the living room. It’s a twisted, yet very funny, tale of a family trying so hard to connect with one another and ultimately discovering that they are utterly isolated in their own worlds of despair and disfunction.

Sounds hysterical right? Well it is. The Lyons is the first play by critically acclaimed playwright Nicky Silver to play on The Great White Way. Most of Silver's work focuses on sort of the dirty underbelly of “typical” American culture with characters that are always tragically flawed and fragile, who desperately want nothing more than to be loved. Bottom line, if you go to a Nicky Silver play, you kind of know what you’re getting into. It’ll make you laugh, but you might feel bad about laughing, and then ultimately, you might feel a little, or even a lot, well, just plain sad. The Lyons does just this and stands amongst some of Silver's best work including one of this writer’s favorite plays, Pterodactyls. If you haven’t read it, and you think by reading this review you might like The Lyons, do yourself a favor and run to The Drama Bookshop and get a copy of a beautifully written piece of American theatre.

Without a doubt, the best thing about The Lyons is the incomparable Linda Lavin, who gives one of the best performances by an actress that I have seen this season on Broadway, or maybe any season for that matter. She really is that good. Lavin, who is probably best known for her work on the hit television series, Alice, (but to this writer will always be the plucky doctor who treats Kermit in The Muppets Take Manhattan), is a true force to be reckoned with. She creates a character that one might describe as a monster, and imbues her with as strange sense of vulnerability and an acidic wit that has the audience eating out of her hand. Tony Award winner, Dick Latessa, also holds his own as the crabby, soon-to-be-dead father of this dysfunctional family.  Kate Jennings and Michael Esper deliver solid performances, as well, as the children of the Lyon clan, but no one on stage comes close to stealing one scene, laugh, or moment from the remarkable Linda Lavin.

The Lyons is an exciting and much needed breath of fresh air to this Broadway season. It is hysterical and it is very dark, but most importantly it is extremely entertaining. Is it the best choice for your grandma visiting from Kansas? Probably not, unless she’s super cool and loves the Coen Brothers and thinks Ricky Gervais is a nice young man. But for anyone wanting to see a well written new American play that isn’t afraid to dive into the deepest pools of dysfunction headfirst and handle the subject matter in a sharp, unapologetic, and very funny manner, you will love The Lyons.

(The Lyons plays at the Cort Theatre, 138 West 48th Street. Performances are Tuesdays at 7PM; Wednesdays at 2PM and 8PM; Thursdays and Fridays at 8PM; Saturdays at 2PM and 8PM; and Sundays at 3PM. Tickets are $26.50-$126.50 and are available at telecharge.com or by calling 212.239.6200. A limited number of $26.50 general rush seats will be sold for each performance, on the day of the show, when the box office opens. Cash only. LImit 2 tickets per person. For more info visit www.TheLyonsBroadway.com.)