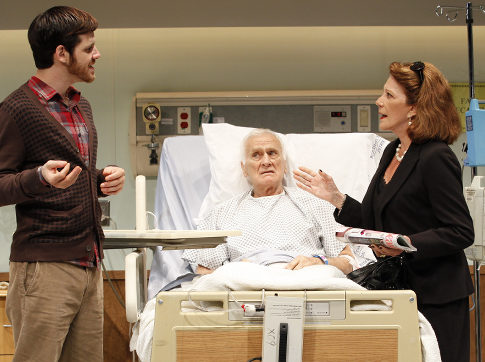 BOTTOM LINE: A biting dark comedy about a cruel family coming to blows.

Filter-less is one way to describe Rita Lyons (Linda Lavin), matriarch of her dysfunctional, upper-class family. Rita says whatever she wants, whenever she wants, and the quips that come out of her mouth are judgmental, bitter, and brutally honest. She's like that crazy aunt that ruins holidays but always leaves you with the best stories to tell your friends. And yet there's something kind of delightful about Rita. Maybe it's Lavin's first-rate performance -- her delivery is hilarious. Rita is emotionally cruel to her family, but you get the sense she used to care, at least a little.

Nicky Silver's new play, The Lyons, examines a troubled family at a dramatic moment in their collective lives. The play is characteristically dark, as is to be expected from Silver (Pterodactyls, Raised in Captivity); bad behavior is exposed and people's worst qualities come to light. When son Curtis says "you are all horrible people," he is right.

The Lyons takes place in a hospital room. Ben Lyons (Dick Latessa) has terminal cancer and not much time left. Rita has called their children Curtis (Michael Esper) and Lisa (Kate Jennings Grant) to come say their goodbyes. This is a shock to Curtis and Lisa, who were never told their father had cancer in the first place. As the family gathers, tempers flare. Although there are occasional glimpses that love is or was present, the group mostly seems like four adults who hate each other but try to seem like a supportive nuclear family because Rita encourages it.

From a pathological liar, to a recovering alcoholic, to a homophobic curmudgeon, to a vindictive manipulator, the Lyons are a motley crew. Through Silver's smart development, the characters all play the victim card while simultaneously betraying one another. You can almost feel badly for them, particularly in the occasional moments of direct address when they can really explain themselves.

Silver's snappy dialogue keeps things upbeat and the play is littered with comic gold. At the same time, its darkness seeps through the humor, giving it an enjoyable weight. Mark Brokaw's direction is spot-on; he carefully massages the story to reveal its truths in due time, which keeps it all active. There is also a great attention to the play's intrinsic humor, and the wonderful ensemble work (which includes Brenda Pressley as the Nurse and Gregory Wooddell as real estate broker Brian) allows every jab to hit and every joke to land just where it should.

The Lyons is an extremely gratifying experience -- not only is it highly entertaining, but when it's over you feel just dirty enough to know that it's an affecting piece of theatre without needing a drink and a shower.