The Bad and the Better

By Derek Ahonen; Directed by Daniel Aukin
Produced by The Amoralists 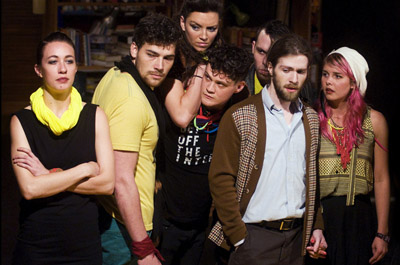 The super hip downtown theatre troupe, The Amoralists, move way up town to the bright lights of 42nd street to present the world premiere of Derek Ahonen’s The Bad and the Better. This gritty detective film noir employs a cast of twenty-six fearless actors under the concise direction of Obie Award winner Daniel Aukin, who recently had a huge critical hit with 4000 miles at Lincoln Center, to bring the audience on a trip through dark alleyways, secret meeting halls, corrupt corporations, dive bars with broken dreams, and every place in between.

The Bad and the Better is a detective noir centered around the Lang brothers, fearlessly attacked by William Apps and David Nash, one with everything to lose and one with everything to prove. Throw in some local anarchists, cops, political power players, a fiery bartender, and a tightly wound, slightly sex-crazed receptionist all unabashedly fighting against injustice, corruption, and/or the people they love the most and you have a multi-layered cautionary tale that explores the dangers in maintaining loyalty and fighting for what you believe no matter the cost. The play asks the question: when it comes to right and wrong or The Bad and the Better, what really is the difference?

The Amoralists have quickly developed a reputation for doing outstanding work of no moral judgement. Their characters often live on the fringe of “conventioanal” moral, social, political, and/or sexual standards. The company always produces work that presents these truly compelling characters in a completely honest and compelling manner that is refreshing change from the sterile and often boring world of most commercial theatre one sees in New York. The Bad and the Better is no different. It’s downtown theatre at an Off-Broadway address. It’s challenging, funny, tragic, and not always pretty, but so is this thing we call life. Ahonen has managed to create a world that is highly stylized, often ridiculous, but still completely human and relatable. While the story might start out a little clunky, stay with it. The pay off is totally worth it. Ahonen is dealing with a cast of 26 actors, and takes his time to develop a story that juggles multiple plot lines in a skillful manner that all unravel and converge with shocking, heartbreaking, and sometimes bloody results.

The Bad and the Better is not your Mamma’s film noir drama. It’s dark. It’s gritty. It’s pretty damn good. If you like theatre that pushes the status quo and asks some deep moral, ethical, and political questions, The Bad and the Better is your bag. If your idea of theatre bliss is Nice Work if You Can Get It, you might want to stay clear of the mean streets of The Bad and the Better, unless you're up for the challenge. It’s always a good idea to ask questions about yourself, the world we live in, and that moral gray area in which much of our society exists. What or who really is bad and who are the good guys?  It’s all about how you look at it and this play forces the audience to examine those very questions.

(The Bad and the Better plays at the Peter Jay Sharp Theatre, 416 West 42nd Street, through July 21, 2012. Performances are Mondays, Tuesdays, Thursdays, Fridays at 7:30PM; and Saturdays at 2PM and 7:30PM; and Sundays at 2pm. Tickets are $49.95 and can be purchased online at www.TicketCentral.com or by calling 212-279-4200. The running time is 2 hours and 25 minutes including one intermission. For more information on the show visit www.TheBadandtheBetter.com.)