Nice Work If You Can Get It

Music and lyrics by George and Ira Gershwin; Book by Joe DiPietro
Directed and Choreographed by Kathleen Marshall 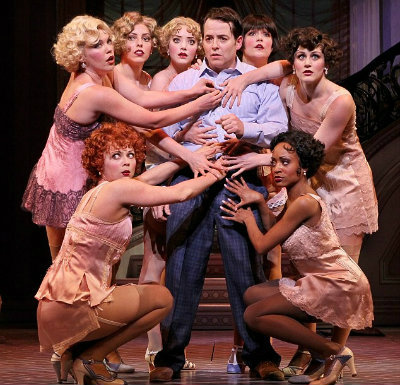 Matthew Broderick and the cast of NICE WORK IF YOU CAN GET IT.

The “new” musical Nice Work If You Can Get It begins when you approach the marquee of the Imperial Theatre on 45th Street. The bright, jumbo red lettering harkens back to a Broadway of yesteryear, and the illustration of Matthew Broderick and Kelli O’Hara could easily be mistaken for that of Fred Astaire and Ginger Rogers. I am happy to report that while this Gershwin-laced musical sparkles with a familiarity of the classic Broadway musical comedy, it avoids the dust. Joe DiPietro (Tony-winning writer of the musical Memphis) makes certain while penning the book that he pays homage to the formulaic structure of the style while never forgetting his 2012 iPhone equipped audience. Director Kathleen Marshall (Anything Goes) creates a fast-paced, laugh out loud, charming evening utilizing the dry sarcasm of Broderick and the spunkiness of Ms. O’Hara exquisitely. O’Hara most notably gives a performance that is outside-the-box from her norm, especially in the physically over-the-top bawdy number, “Treat Me Rough.”

DiPietro’s book never quite seems to be simply a vessel to plug in Gershwin numbers. And, whenever it does venture into this territory, it does so tongue-in-cheek. More often it is evident that there was a genuine scouring of the Gershwin songbook in order to find the pieces which will assist this escapist take on prohibition-era New York. There are a few of the standards like the namesake, “Nice Work If You Can Get It,” “’S Wonderful,” and “Let’s Call the Whole Thing Off,” but there are also some lesser-known songs such as “Delishious,” which is performed in a bubble bath by Jennifer Laura Thompson alongside chorus girls who delightfully emerge out of her tub.

The story revolves around Jimmy Winter (Broderick), a rich playboy who has never worked a day in his life. It opens on the eve of his fourth marriage to Eileen Evergreen (Thompson), the daughter of a wealthy senator (Terry Beaver). Jimmy has been partying the night away at a speakeasy near the docks in lower Manhattan. It takes no time at all until he falls for another woman, this time a tough-a-nails bootlegger, Billie Bendix (O’Hara), whom he crosses paths with amidst a police raid. The cops announce over megaphones, “We got the place surrounded...except for the back,” a reoccurring, hilarious revamping of a cliché line. Jimmy lets slip to Billie that he owns an extravagant estate on Long Island which he never ever uses (sounds familiar).

Billie decides to take her gang and stash their bootlegged hooch at Jimmy’s estate to lay low for a while. Of course, conflict ensues when Jimmy and his new wife show up at the estate to consummate the marriage followed by her family, his female entourage and Duchess Estonia Dulworth (a show-stealing performance by Judy Kaye), the head of “The Society of Dry Women,” (a name which she later admits to being a bit “unfortunate”). Billie’s henchman, Cookie McGee (a brilliantly comedic Michael McGrath) provides for the perfect foil to Dulworth’s conservative sensibilities. As with any musical comedy worthy of the name, love triangles and misconstrued identities abound, leading to the revelatory scene brought on by the marvelous entrance of Estelle Parsons as Jimmy’s mother.

Oh, and there is toe-tapping music along the way. Tom Murray conducts a stellar and vibrant orchestra. Martin Pakledinaz’s costumes are perfectly extravagant at points, and deftly sharp and modern at other times (do not be blinded by the pin stripes). Derek McLane’s classic scenery and drops fill the massive proscenium aided by the generous pastel brushes of color in Peter Kaczorowski’s lighting. Marshall’s choreography remains true to the style, tight and yet humble. Broderick is perhaps given a few overly long dance breaks which reveal some of his limited hoofing ability. However, most of the complicated choreography is left to the professionals led by dance captain, ensemble member Jason DePinto.

Somehow, Marshall and DiPietro have given us a glimpse of what musical comedy “fluff” looks like in a post-9/11 world. It’s a bit more self-aware, more edgy, and grateful for the escapist qualities that it can offer to everyone (both Occupiers and Tea Partiers alike). This is evident in one of O’Hara’s strongest numbers of the evening, “Someone to Watch Over Me,” performed with shotgun in hand. DiPietro never allows the audience to escape completely from our world, as hardworking individuals providing a service are deemed immoral, and the wealthy elite are let off the hook for all of their flaws.

Nice Work most of all endeavors to show a Broadway where we can all convene in this truly American art form, and bask in the greatness of these titans of the American songbook. As the final curtain falls we see the drawn caricatures of George and Ira projected on the curtain reminding us that they will always have a place on the Great White Way, even if it only still exists in our country’s collective nostalgia.