The Creative Team of SeaWife 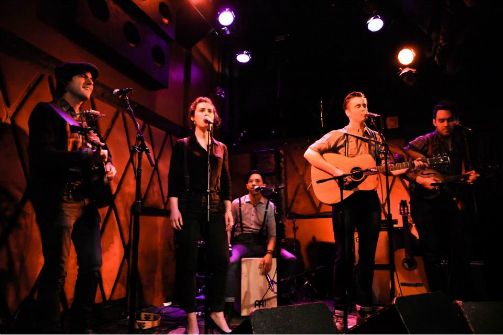 "Drawing from the deep well of 19th century nautical literature, SeaWife is a blend of modern theatrical storytelling with 1830s tropes. Found object puppetry, ghosts, a Leviathan, and original music by The Lobbyists combine for a one-of-a-kind event that is part play, part concert, part immersive experience."

Talk to me about the Lobbyists’ decision to mount a production of a new play. How did this all come to be?

CRAWFORD: Well one night we were like “let’s do a nautical ghost story.”

Someone said that, out of the blue?

CRAWFORD: Pretty much.
TURNER: We talked about the fact that we were musicians but also actors; there was a generalized desire to marry the two.
EONNET: Because we met doing a play together, we were first and foremost actors together. We got to a point playing and writing music together where we felt like we wanted more out of our collaboration. We wanted to add on another element that we all shared: acting. And we wanted to bring on a really wonderful playwright because none of us are writers. So that’s when we started thinking about who we wanted to work with and Seth [Moore] was the first person on our list. So we all hung out on a roof in the West Village during the summer and we started telling ghost stories and Seth suggested this idea from a radio play he’d written. We all really liked the idea and he offered to expand on it.

There's a lot of Lobbyists in SeaWife. How did the non-Lobbyist(s) get involved?

WATERBURY-TIEMAN: I moved to New York City last January. And I play the fiddle. I was playing one day in Penn Station to make a little laundry cash. This guy came over and watched me.
CRAWFORD: Well, from my perspective, I heard this sweet, sweet fiddling wafting through the corridors of Penn Station. So I followed the sound.
WATERBURY-TIEMAN: Tommy came up and asked if I had a business card. And I got an e-mail a couple hours later.
GRUBBS: At the time, we were ready to expand our instrumentation.

What are you trying to accomplish in sharing this piece? What do you want the audience to take away from it?

CARLSON: I believe that theater has the capacity to do things with human connection that no other medium can achieve. What I believe Seth does with his writing and what the Lobbyists do with their music is create a rigorous visceral experience that is telling a deeply, deeply human story through a theatrical and immersive format... We refer to this as a concert play as opposed to a musical; we believe it’s a combination of forms in our own unique way as artists... We want the audience to be left with an awesome night of quality, quality storytelling and music.

How many public sharings of SeaWife have there been so far? What are some interesting or exciting things you guys have learned from each sharing?

CRAWFORD: Our first workshop was in September. We presented a reading with a lot of music at the Paradise Factory, in collaboration with (not just) 3 New Plays...Then we did a quick workshop/check-in in December. We added some new songs and discussed dramaturgical questions... In January we did a three-week long workshop. This time, the purpose was to get it on its feet.
TURNER: What I’ve learned from the workshop is that theater, at its best, demands the audience meet it halfway. It’s exciting to see how far the audience can come with us, through the language, music and economic stage pictures.
GRUBBS: I was excited that the audience was asking the right questions at the end of the play and how much they were with us. It’s not a wild story but it goes to a fantastical place where strange, out-of-the-ordinary things happen.
MOORE: There’s a moment in the beginning where these guys are making animal noises to re-create a jungle, and every night someone in the audience would start making noises back. This is shit we weren’t even thinking about. Like “Oh, they want that? People want that from their theatre experience?”... There’s a lot of room for more of that, in a way that would deepen the piece. If you’re gonna go for an immersive experience, there’s a whole other layer to it we haven’t even started to explore.

After you present a version of SeaWife, how do you change and adjust the script and story?

EONNET: At first I said ‘there’s a lot of cooks in the kitchen.’ But we’ve found a way of working together that is extraordinary. We’ve each found a real role and are each necessary in very different ways... We each freely say what we think, whether it’s about storytelling or something from our character’s perspective.
MOORE: A lot of my rewrites mirror the lyrical structure of the Lobbyists’ songwriting. You respond to what the rest of the group puts out there, and it bounces around through group thought.
CARLSON: After a public presentation, we make sure to have a meeting within a week. During that week, we collect our friends and colleagues’ feedback and our own. And we do extensive feedback sessions, without judgment or priority. And that’s all with us as we move forward.
MOORE: Our last feedback session lasted six hours.

What’s next for you guys and for the show?

CARLSON: We have a writing workshop again in April. We will be doing a summer residency focusing on the physical life and immersive aspect of the piece. It will continue in the development pipeline within Naked Angels, exploring how we can get it produced in the next year or so.
CRAWFORD: And The Lobbyists will be playing a lot of gigs in the next few months, focusing on music from SeaWife.

How can people keep up to date with all this?

CARLSON: SeaWife is a haunted nautical concert play. With love.