A Hard Wall at High Speed

By Ashlin Halfnight; Directed by May Adrales
Produced by Astoria Performing Arts Center 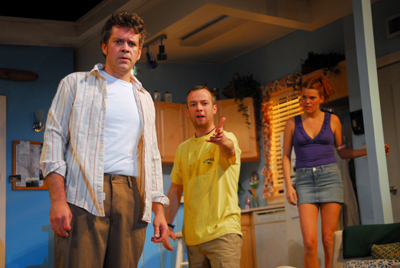 BOTTOM LINE: A dramedy about one man's critical error; it starts out light and ends up gravely serious.

For Donnie (Tom O’Keefe), life is great until it’s not. In Ashlin Halfnight’s new play, A Hard Wall at High Speed, Donnie goes from upstanding family man to pariah in one fateful day. As he realizes the gravity of his mistake, his psychological wellbeing also begins to unravel. His subsequent breakdown is not only personally destructive, but also takes its toll on his loved ones.

A Hard Wall at High Speed is essentially a character study based on what happens when a community’s frustration is unleashed on one person. Donnie becomes villainized because someone needs to take the blame. And the result is devastating for Donnie and his family, particularly his wife June (Sarah Kate Jackson).

We learn that the two couples, though different, are an endearing foursome and a hub of support for one another. This bond becomes necessary later on when Trout must assume many of Donnie’s responsibilities. The strength of these relationships is tested as Trout eventually turns on Donnie while Marcy steps up in his defense. Family bonds enter the conversation and even unconditional love has its limits. All four actors give remarkably nuanced and committed performances.

Halfnight’s play is engrossing because of its look at compassion. It gets into terribly sad territory, but its rawness reveals much about relationships: marriage, family, friendship, even community. The dramatic unraveling of the tale is somewhat predictable since the play is linear, realistic, and what-you-see-is-what-you-get. Save for some lovely and poetic moments (a poignant glider metaphor), the delivery is very straightforward. I would be interested to experience this story as less of a voyeur looking in and as more of an active participant in Donnie’s struggle/breakdown.

Director May Adrales lets the characters zing through life until a dramatic turn makes the action and conversation much heavier. The tone and pace are spot-on for this multi-dimensional story. APAC pulls out all necessary stops with this production, creating a successful theatrical event. A gorgeous set by Stephen K. Dobay depicting a cozy Floridian home helps give life to the atypical but loving family at the center of the struggle. And Halfnight’s voice shines through A Hard Wall at High Speed, offering much witty banter and occasional artistic expressiveness.

(A Hard Wall at High Speed plays at Astoria Performing Arts Center, Good Shepherd United Methodist Church, 30-44 Crescent Street, Astoria, Queens, through November 19, 2011. Performances are Thursdays and Fridays at 8PM; and Saturdays at 2PM and 8PM. Tickets are $18 and can be purchased at apacny.org. For more show info visit apacny.org.)