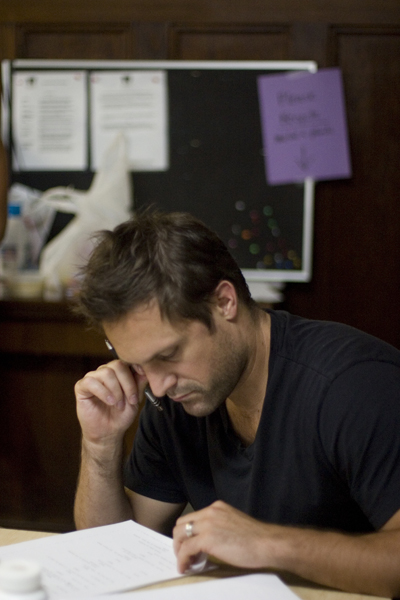 MM: How long have you been a working playwright?  What was your first professional foray?

AH: I guess I've been writing plays for about 10 years? I can't really remember, to be honest...but my first play was something called playtherapistplay. It was a rewriting of the story of the Garden of Eden, with three women (a psychiatrist, a writer, and a rape survivor) as Eve, and an odious, mercurial rapist as the snake. I thought I was awfully clever with the title...

The play was done by a company that no longer exists. It ran for a hot second in New York, then at the Montreal Fringe, and then the Toronto Fringe. I didn't know what the hell I was doing, and the play was immature in many ways, but it was a hell of a lot of fun to travel around and see it in Canada...and everyone had a blast...people met their future mates, and I've worked twice since with Bryan Grossbauer, who was in that original show.

MM: How would you describe your work?  What playwrights have influenced you?

AH: I think I have large-scale ADD when it comes to subject and style. I can't really describe my work very well because every play is a new adventure -- a clean slate. Some of them are intended to be funny...some not...some are sci-fi...some are kitchen sink. It's a problem, maybe, because there's no branding for a "Halfnight play" but whatever...

I think Michael Frayn is kind of amazing... he's a versatile master in many things, and he's not afraid to jump into something totally unfamiliar and kick its ass. As for other playwrights, I guess I'm more into specific plays: How I Learned to Drive, Proof, The Crucible, and Our Town. Mary Zimmerman's Metamorphoses was amazing, as was the experience of seeing all three plays in The Coast of Utopia in one day.

More locally, Mark Schultz has been a big influence... he's such an amazing talent, so precise and funny and brave; but also, he's just an incredibly generous spirit.  He's a great guy, so smart and curious about the world, and he's a talented playwright who walks through the theater world with a kindness and keen interest in others that is unique.

MM: This is your first play to be produced by APAC, and also APAC's first world premiere (they are known for revivals). Why do you think your play is a good match as APAC endeavors to produce more new work?

AH: I think this play is a good match for APAC because it's edgy and a little dangerous, but not way out there...some of my work can be a little weird. Hard Wall is a pretty mainstream play that hopefully says something about what it means to be an American today. It's topical, funny (hopefully), dramatic, and ultimately it's about a subject people can find a way into...a family in peril.

MM: What is A Hard Wall at High Speed about?

AH: A family in peril. No, actually...the play is about a pilot in south Florida who has the perfect ascendant existence -- a beautiful wife, a decent home, a baby on the way, a respected position in the community, and a promising career that he loves. His life begins to spiral out of control after an oversight causes a lot of pain and hysteria...and the play is basically about someone struggling to maintain sanity, productivity, and honor when their community turns against them.

MM: Where do you see yourself in the spectrum-of-young-American-playwrights? Where do you hope to be in a few years?

AH: The spectrum of Young American Playwrights...that'd be a nice place to be. Sounds like an exclusive airport lounge, with free vodka, that you can get into if you've had a play performed at MTC or Roundabout or something. I don't know. I really don't imagine that people put me in that category.

I think I don't really think of myself in those terms. I think of my plays as existing in contrast to or concert with other work that is emerging right now, and I hope that my work speaks for itself...and whatever it says, I guess I hope it's meaningful somehow, to someone.

In five years I hope to be happy, healthy, and employed. I hope to have found a satisfying and productive balance in my life between art, family, and career. I hope to have completed a play that honors my two living grandmothers...and I hope they get to see it live, on stage.