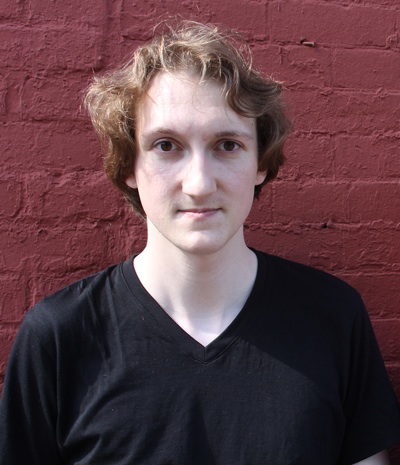 THEASY: What is M-34 all about? What's your mission? And how did you get started?

JAMES RUTHERFORD: M-34 started five years ago as a one-off company of college chums, alienated and lost and trying to take a stand in New York City.  A series of drunken and impassioned meetings culminated in a jumbled but heartfelt effort called The Importance of Being Ernest Hemingway. It played for a single weekend, a weekend that surely would have rocked the American Theatre if indeed anyone had seen it at all. After our glorious flop we all went our separate ways, some going back to school and some leaving theater altogether. The company came and went, but our time together made an impression and I held onto the name, dusting it off for a few shows that seemed in keeping with that first burst of energy. Now, five years later, much of the same gang is back together for the next phase of the project that brought us together in the first place.

Our mission is perhaps less about aesthetics and more about rigor. I think that the major failing of our independent theater is not lack of talent but lack of artistic accountability. Indeed the content of our work to date has been about the power of creativity, the human cost of making art and the relationship of the artist to society. It has thus been extremely humbling to dive into the work of Hemingway and Wilde, invariably measuring our rigor against two of the most serious artists ever to walk on this planet.  Our inevitable failure to live up to these paragons mirrors their failure to live up to their own personal ideals. To quote Wilde: we are all lying in the gutter but some of us are looking at the stars.

THEASY: Who's in charge at M-34? Who are the powers that be?

JR: That would be me. I'm a proud son of Columbia University's directing program and a sometime protege of Romanian director Andrei Serban. I've studied Shakespeare and Grotowski in England and Poland, respectively, and I've spent some of my youth as a worker in Richard Foreman's theater mines. I've directed all of M-34's shows and have thus far been the piece that connects them all.

That said, there is a very tight ensemble of collaborators, and for some of them this is their third show with M-34. Elliot B. Quick in particular has gone from a performer in the first iteration of this show to a very close collaborator, and we have worked so closely on all artistic and producorial matters that there is no real hierarchy or clear division of labor.

THEASY: Tell us about your latest production, The Importance of Being Ernest Hemingway. What's it about? What can audiences expect?

JR: So for starters, "earnest" was 1890s code for "homosexual" -- a clear hint that there was always more depth to The Importance of Being Earnest than we have ever given it credit for. Two weeks after the play originally opened in 1895 London, Wilde's abusive relationship with a young man had led to him being on trial for homosexuality -- the trial that would cost him his freedom, his health and ultimately his artistic career. Given that the play itself is about a man leading a double-life, we started to wonder if we could use it as a frame in which to talk more broadly about Wilde's life, work and commitment to art.  This led us to discussions of what "earnest-ness" really is: the moral imperative to live one's life in a straightforward, truthful and emphatic manner. And, naturally, who better to speak to earnestness than Ernest Hemingway? What started as a silly pun has grown into something with surprising depth, and we've been delighted to discover that these two artists actually have a great deal to say to each other about bravery, death, and what it means to live life through one's Art.

At its heart, this piece is an ode to these two great writers.  The audience can expect the equivalent of a long night of drinking: what starts off as a bright and jubilant fiesta soon devolves into debauchery, brawl, and horrible revelation.

JR: After the ever-expanding scope of this play, it would be great to work on something which collapses into itself. Recent conversations about the relationship between tragedy and farce have us leaning towards The Chairs by Eugene Ionesco, most likely in an original translation. We've also got a production of Sarah Kane's 4.48 Psychosis from 2012 that we're just dying to bring back.

THEASY: What are your long-term goals? Where do you hope to be in 5 years? 10 years?

JR: While it would be certainly nice to have institutional support, a permanent residence and a European tour, our major goal is to have an impact on the artistic/critical landscape beyond the scope of our own theatrical work. If the only point of soliciting criticism is the boost in exposure that comes from a good review, then we all are truly lost. For Art to thrive, it must be tended not just by its creators but by a community of critics who see their role not as consumer advisors, judging the merits of a piece by his or her own subjective aesthetics, but rather as active participants in the artistic process, meeting the artists on their own terms, assessing the success of the work in relation to their own goals, and placing the work in a broader critical context lest the artists slip into hubris and solipsism. The hope is to create a platform on which aspiring Critics-as-Artists and Artists-as-Critics (credit to Mr. Wilde for the phrase) can come together and help forge an earnest artistic community.

(The Importance of Being Ernest Hemingway plays at the Access Theatre, 380 Broadway, August 17-September 1, 2013. Performances are Thursdays through Sundays at 8PM. Tickets are $15. To purchase tickets and for more information, visit M-34.org.)