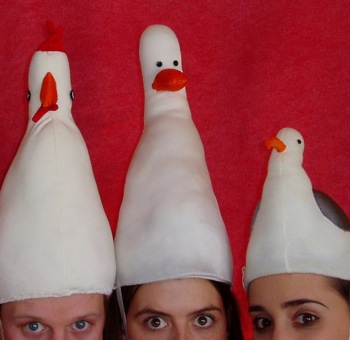 When was Wakka Wakka formed? Who were its founding members and from where did the company begin?

Wakka Wakka began in 2001 as a group of alums from Ecole Jacques Lecoq who created a show together, and continued in NYC in 2003 as myself, Gwen [Warnock], Kirjan [Waage] and another friend who has since left the group. After doing b9 at Edinburgh Fringe, Gwen (whom I have been friends with since we studied theatre together at 15 at the Chautauqua Institution) moved to NYC and Kirjan followed. In time they had both moved into my apartment and rehearsals for our first NYC Wakka show, Fattie and Skinny Show!, had commenced in my living room. The rest is history.

What is Wakka Wakka all about? How have the company's objectives changed over the years?

Our mission is to create bold, unique and unpredictable original works of visual theatre that stretch the boundaries of the imagination. Our objectives have really stayed true to themselves over the years. While we did not start out with puppetry, we have always worked very heavily with objects and a strong movement language, so puppetry was a natural progression more than a change. At our core, we want to entertain. We want to tell stories that are as powerful in their visual and soundscape language as they are in their narrative. We want to make our audience feel a wide range of emotion -- joy, love, anger, sadness -- and we want them to leave the theatre with their thoughts provoked.

Your 2010 production Baby Universe played to great response at Baruch Performing Arts Center. In fact, Theasy called it "the best post-apocalyptic puppet show you probably haven't heard about and need to see." So naturally we're really looking forward to your new production, SAGA. What can we expect?

Thanks! SAGA is an interesting project for us because it’s the first show we’ve ever done that takes on a moment in contemporary history, so in that sense it’s something new and different. In my opinion, the media has done a great job covering up the suffering of individuals in this country as a result of the economic crisis. For a while there we heard a lot about foreclosure, but other than that there has not been much discussion of how people have been affected personally. There has been a tremendous amount of devastation wrought by large corporate banks who have paid little to no price for what they have done to our citizens, and part of what is so astounding about that is the lack of outcry or demand for reparations from those citizens. They have lost material possessions and power.

SAGA is actually quite funny and sweet. But you also deeply experience this crisis with this man and his family. Because the situation in Iceland was so sudden and so severe, you really feel what it is to go through this total and overwhelming loss with Gunnar, our protagonist. What I love about this show is the sense of injustice these events inspire in the audience -- it really speaks to the power of theatre to inspire social change (in my humble opinion!).

You are billed as a "visual theatre company" -- what types of artists do you generally collaborate with? How do visual representation and story go together, and which usually comes first when you're developing a new show? Who is the creative team behind SAGA?

For us the visual story is told through movement as well as objects, and it is as important as the narrative, which is as important as the sound design, score, projection (if we are using it), etc. We tour quite a bit internationally, and one of the biggest compliments we have ever gotten was from someone in Norway who told us that while they did not understand all that much of the dialogue, they were incredibly moved by the show -- I think that sums up rather well the relationship we aspire to between the visual and the narrative -- they tell the same story at the same time and the piece is not complete nor effective without both, woven together.

When we are developing work, the two happen hand in hand -- the puppets and scenography inspired by a story idea are almost immediately sketched out by Kirjan to see if they are something we want to explore.  From there the story and puppets continue to be fleshed out simultaneously, since a lot of our writing comes from devising, and we can’t devise without puppets and objects to play with.

SAGA is written and directed by my two partners, Kirjan Waage and Gwendolyn Warnock, with help on the story from the Wakka Ensemble. Kirjan designs the puppets and Gwen the masks and costumes.

As far as collaborators, we look for people who are experts in their field but most importantly have a sense of play. I would say those are the two most important qualities that we look for. And when we find collaborators who we really mesh with artistically, we work with them for years. For example, this is our seventh year working with our composer, Lars Petter Hagen.

What are Wakka Wakka's goals? Where do you hope to be in 5 or 10 years?

We have been self-producing our own work for a long time, which gives us a wonderful freedom but also responsibility as a presenting organization. In 5 or 10 years it would be great to continue our pattern of self-producing but also to have work commissioned by the BAMs and Lincoln Centers of the world!