Off Off Broadway, Play
Runs through 4.16.10
The Brick Theater, 575 Metropolitan Avenue, Brooklyn 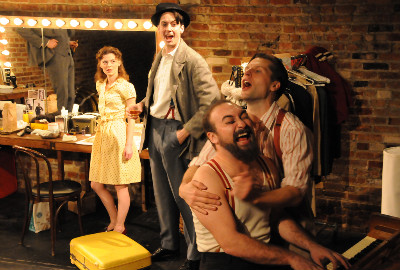 BOTTOM LINE:  Join the Tremendous Traveling Abbotts, a performance troupe celebrating the end of their run at the exciting 1939 World's Fair, in this well-crafted piece by The Mad Ones.

There is a palpable and intense excitement the instant The Tremendous Tremendous begins. And it’s well-warranted—the year is 1939 and the thrilling World’s Fair has just ended in New York. In their dressing room, we witness the Tremendous Traveling Abbotts change, reflect, and celebrate their successful run.

Consisting of Lucillia, the sole female member; Charlie, a handicapped performer; Squid, the newest addition; and Henry and Henry, the “twins” of the group, the Abbotts have a strong and developed rapport. Together they are a boisterous bunch with excellent chemistry. This familiarity is probably due to the fact that The Tremendous Tremendous is the work of The Mad Ones, an award winning "human collaboration project."

As we watch the Abbotts undress and celebrate their success at the Fair, we learn more about their interpersonal relations. While these dynamics are apparent, their personal histories and their history as a troupe are alluded to only intermittently. But this is not a problem at all; the lack of a firm spelling-out of their past permeates the work with a sense of mystery and wonderment that works well for this piece.

The cast's talents are on full display as they jokingly perform while drinking and celebrating. Stephanie Wright Thomson (as Lucillia) sings accompanied by Micheal Dalto (as Squid) on the piano. Joe Curnutte (as Charlie) tap dances despite having a wooden foot; Marc Bovino and Henry Vick (as the Henrys) join in the fun too. These moments of performance are not isolated numbers, but rather are brilliantly integrated into the work.

The Tremendous Tremendous, written by Bovino, Curnutte and Wright Thompson (who also appear in the piece), is well-researched and infused with many references to the 1939 World's Fair and the general historical era. Also included is a short film of the World's Fair that the Abbotts watch for the final time and comment on.

The show is both funny and bittersweet, as the Abbotts tenderly tease each other at times, and also reflect on their past performances and the question of what will come next. Nowadays, in our digital age of easy information, it is hard to fathom how exciting the World's Fair was, as the different cultures and countries of the world were brought together in one park in Flushing, Queens. The Tremendous Tremendous captures that spirit and euphoria of the fact that you can (as Lucillia describes) “walk out the door and go anywhere in the world.”

The costumes designed by Sydney Gallas are extraordinarily well-done and reflective of the time period, impressively even down to the undergarments. The set design, by The Mad Ones, features numerous period pieces and props, and fits the space at the Brick Theater well.

The Tremendous Tremendous is an engaging and entertaining evening spent with a type of traveling performer that rarely exists these days. It is a well-crafted, engrossing, and exciting piece that brings us into the dynamics of this troupe and also brilliantly captures the feeling of the time.

(The Tremendous Tremendous plays at The Brick Theater, 575 Metropolitan Avenue in Williamsburg, Brooklyn, through April 16th. Performances are Thursday through Saturday at 8 PM. Tickets are $18 and are available at bricktheater.com. For more information visit madone.wordpress.com.)